Reconciliation and family values: How the Bolton Book of Hours helped to calm the storm of rebellion in medieval York

A turbulent period in York's history, which included the execution of its Archbishop, underlies the text and images in the rare and richly illuminated medieval manuscript the Bolton Book of Hours, owned by York Minster Library. It is the subject of a new interdisciplinary study by Dr Sarah Rees Jones and Professor Felicity Riddy of the Centre for Medieval Studies. 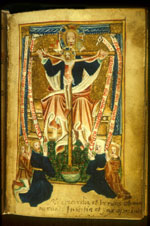 One of the most commonly owned prayer books among the well-to-do laity in the Middle Ages, a Book of Hours set out the prayers for each liturgical hour of the day - hence the name. Calendars, prayers, psalms and masses for certain holy days were often included as well as the names of saints and prominent deceased family members.

The most intriguing aspect of the book is its reference to Richard Scrope, Archbishop of York. In 1405 he led a northern rebellion against King Henry IV, was arrested at Pontefract, tried at Bishopthorpe Palace and beheaded. This was the first time that a lay court had ordered the execution of a prelate. In the aftermath, families in the city were torn apart in their support for one side or the other and there was an urgent need for a reconciliation to prevent further unrest.

The researchers argue that the Bolton Book of Hours was used as a vehicle for imagining and promoting harmony, both private and public, both local and national. Within a few years of his death, Richard Scrope came to be venerated as a cult figure with a saintly status. His elaborate tomb in York Minster became an important shrine for pilgrims.

This transformation is reflected in the Bolton Book of Hours. The images display a curious combination of devotions. On the one hand,they celebrate the official public masculine authority of the Church, through its apostles and bishops. On the other, there is an equally strong focus on intimate, family values, represented through the cults of a number of newly popular female saints associated particularly with domestic life. By appealing to values of familial affection, nurtured in the heart and in the home, and represented in the book's depiction of Archbishop Scrope as a patron of the chaste, the authors argue that the aggressive and worldly power struggles of rebels and their opponents could be dissipated.

Felicity Riddy is a Professor in the Centre for Medieval Studies and Department of English, fjr1@york.ac.uk