A study of ancient and modern elephant DNA has come up with the unexpected conclusion that the African elephant is divided into two distinct species.

The discovery was made by researchers at the Universities of York and Harvard when they were investigating the genetic relationship between the extinct woolly mammoth and mastodon to modern elephants.

Once they extracted DNA sequences from two fossils, mammoths and mastodons, the team lined them up with DNA from modern elephants over hundreds of sections of the genome. It was then that they found to their amazement that modern forest and savanna elephants are as distinct from each other as Asian elephants and mammoths.

The scientists used detailed genetic analysis to prove that the African savanna elephant and the smaller African forest elephant have been distinct species for several million years. The team only had DNA from a single elephant in each species, but had collected enough data from each genome to traverse millions of years of evolution to the time when elephants first diverged from each other. 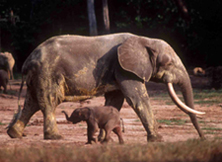 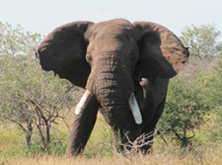 "The divergence of the two species took place around the time of the divergence of Asian elephant and woolly mammoths," said Professor Michi Hofreiter, who specialises in the study of ancient DNA in the Department of Biology at York. "The split between African savanna and forest elephants is almost as old as the split between humans and chimpanzees. This result amazed us all."

There has long been debate in the scientific community that the two might be separate species, but this is the most compelling scientific evidence so far that they are indeed different species.

Alfred Roca, assistant professor in the Department of Animal Sciences at the University of Illinois, said, "We now have to treat the forest and savanna elephants as two different units for conservation purposes. Since 1950, all African elephants have been conserved as one species. Now that we know the forest and savanna elephants are two very distinctive animals, the forest elephant should become a bigger priority for conservation purposes."