A team of international researchers has provided the first comprehensive DNA evidence that the Addis Ababa lion in Ethiopia is genetically unique and is urging immediate conservation action to preserve this vulnerable lion population.

While it has long been noted that some lions in Ethiopia have a large, dark mane, extending from the head, neck and chest to the belly, as well as being smaller and more compact than other lions, it was not known until now if these lions represent a genetically distinct population.

The team of researchers, led by the University of York, UK, and the Max Planck Institute for Evolutionary Anthropology, Germany, has shown that captive lions at the Addis Ababa Zoo in Ethiopia are, in fact, genetically distinct from all lion populations for which comparative data exists, both in Africa and Asia.

A key question is which wild population did the zoo lions originate from and whether this wild population still exists; this would obviously make it a priority for conservation

The researchers compared DNA samples from 15 Addis Ababa Zoo lions (eight males and seven females) to lion breeds in the wild. The results of the study, which also involved researchers from Leipzig Zoo and the Universities of Durham and Oxford, UK, are published in the European Journal of Wildlife Research.

Principal Investigator Professor Michi Hofreiter, of the Department of Biology at the University of York, said: “To our knowledge, the males at Addis Ababa Zoo are the last existing lions to possess this distinctive mane. Both microsatellite and mitochondrial DNA data suggest the zoo lions are genetically distinct from all existing lion populations for which comparative data exist.

“We therefore believe the Addis Ababa lions should be treated as a distinct conservation management unit and are urging immediate conservation actions, including a captive breeding programme, to preserve this unique lion population.”

The lion (Panthera leo) is the principal terrestrial predator in Africa and therefore a key species of the savannah ecosystem. Lion numbers are in serious decline and two significant populations of lion – the North African Barbary lions and the South African Cape lions have already become extinct in the wild.

One of the regions with a declining lion population is Ethiopia. In addition to a few hundred wild lions scattered throughout the country, 20 lions are kept in the Addis Ababa Zoo. These lions belonged to the collection of the late emperor of Ethiopia, Haile Selassie. He established the zoo in 1948 and the seven founder lions (five males and two females) are claimed to have been captured in south-western Ethiopia, although their geographical origin is controversial. 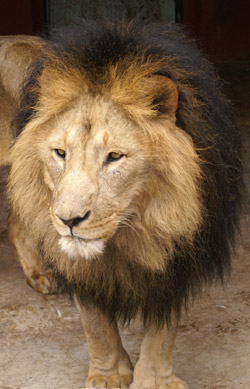 ‌In their study, the team of researchers recommend establishing a captive breeding programme as a first step towards conserving this unique lion population.

Lead author Susann Bruche, now with Imperial College London, but who conducted the research with the Max Planck Institute for Evolutionary Anthropology, said: “A great amount of genetic diversity in lions has most likely already been lost, largely due to human influences. Every effort should be made to preserve as much of the lion’s genetic heritage as possible. We hope field surveys will identify wild relatives of the unique Addis Ababa Zoo lions in the future, but conserving the captive population is a crucial first step. Our results show that these zoo lions harbour sufficient genetic diversity to warrant a captive breeding programme.”

Professor Hofreiter said: “A key question is which wild population did the zoo lions originate from and whether this wild population still exists; this would obviously make it a priority for conservation. What is clear is that these lions did not originate in the zoo, but come from somewhere in the wild - but not from any of the populations for which comparative data is available.”