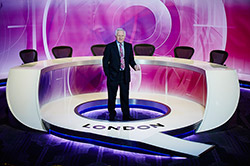 Question Time is shown tonight on BBC One at 10.50pm and will be available on BBC iPlayer after transmission.