Ruth Kircher and Sue Fox (2019) conducted an online survey among 800 Londoners to find out what sorts of attitudes they had towards MLE. They asked several questions, but the overall result is interesting: on a five-point scale, on which 1 is very low and 5 very high, the people who answered the survey gave MLE an overall score of 2.2 - more towards the low end.

Interestingly, people who claimed to speak MLE gave it a better rating than those who didn’t (2.37), as did people who had frequent contact with MLE speakers, people who had a mother tongue other than English, and people with higher levels of education. Exposure and education breed tolerance, acceptance and, eventually, positive feelings.

Playing actual recordings of MLE to Londoners shows the picture is a subtle one. Amanda Cardoso and her colleagues investigated how people respond to the MLE accent - does it make a difference if there are only a few features, or if MLE features are more ‘full-on’? The researchers were surprised to find that the milder version of MLE was rated as highly as Received Pronunciation (also one of the accents being investigated), while the stronger version was the most poorly rated accent.

Both of these studies are referenced in Publications of the MLE Resources webpage. 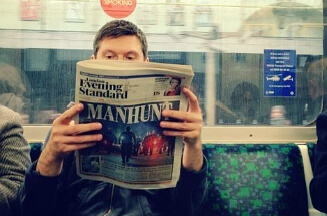 The media treat MLE in different ways, both positive and negative. We’ve already seen how one newspaper accused MLE of ‘pushing out’ Cockney, though it was done in a non-judgemental way. Sometimes a newspaper can be harsh, mentioning MLE (or ‘Jafaican’) in the same breath as bad behaviour:

“Although it [a sitcom for children] dealt with teenage sex - or the lack of it - drugs, and parental rebellion, it steered clear of any real issues, so there was no "Jafaican" spoken, no stabbings or gun crime, no teenage abortion.” (The Independent on Sunday, 5th June 2011)

“How did Nang, Greezy and Butters triumph in 2010?
a) They are the producers who work on the X Factor winner's recordings.
b) They are the stars of a new CBeebies show.
c) They are "street" or "Jafaican" expressions which have overtaken Cockney slang terms.
d) They are ingredients popularised by Delia Smith in her last Waitrose promotion."
(End-of-year quiz in the Evening Standard, 24th December 2010)

The London riots of August 2011 were a turning point in relations between young people, their communities and the police. Although the riots took place in many English cities, it was in London that a relatively large proportion of rioters could be seen to be of a BME background - reflecting the proportion of working-class Londoners who have these backgrounds. In a BBC Newsnight discussion on 13th August 2011 (see picture left), the historian David Starkey commented:

“The whites have become black. A particular sort of violent, destructive, nihilistic, gangster culture has become the fashion, and black and white, boy and girl, operate in this language together, this language which is wholly false, which is this Jamaican patois that has been intruded in England, and that is why so many of us have this sense of, literally, a foreign country.”

Starkey doesn’t use the word ‘MLE’, but it’s obvious that that is what he is referring to. He calls it ‘this Jamaican patois … that has been intruded in England’. He calls it false, and by implication foreign. MLE is neither of these things. In a TEDx talk in September 2011, I talked about Starkey’s comments, criticising them heavily.