The department celebrates the achievements of two senior colleagues and former heads of department, Professor Bill Sheils and Dr Allen Warren, who retire later this year having worked with us for more than 52 years.

Dr Allen Warren, who joined the department in 1972 and was head of department, has always taken a keen interest in his students' learning and personal development. Drawing on his experience as Provost of Vanbrugh College (1984-2008) as well as that of university teacher, Allen founded the York Students in Schools scheme and the York Award which encourage students to volunteer and help them to improve their employability long before such programmes became fashionable. Allen received an MBE in the Queen's Birthday Honour's List in recognition of this work. As co-founder of the Yorkshire Country House Partnership, Allen has also been a pioneer in forging links between academic historians and those working in the heritage industry. 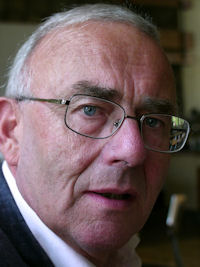 Last month Professor Bill Sheils, who joined the department in 1999 and retires as head of department, was nominated for the Student Supervisor of the Year Award 2011. The nomination recognised his "consistently high level of performance as a supervisor." As a committed university teacher, this was a fitting end to Bill's career.

The contribution he has made to religious history and the history early modern Britain was celebrated at a symposium held in his honour. After listening to a personal appreciation by his friend and colleague Dr Felicity Heal (University of Oxford), Bill heard papers by colleagues and former research students. At the end of the symposium he was presented with the manuscript of a Festschrift edited by two former doctoral students which is to be published by Ashgate. Contributors include Professor Alex Walsham (University of Cambridge), Professor Peter Marshall (University of Warwick), Professor Peter Lake (Vanderbilt University) and Professor Stuart Carroll (University of York). An edited volume of Bill's selected essays and articles will appear next year.

To lose one head of department in one year is unfortunate, but to lose two appears careless. Your colleagues are sad to see you go and wish you all the best for your retirements.