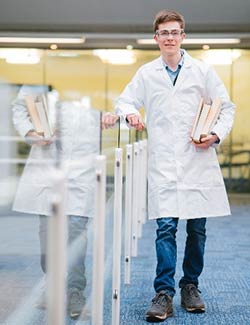 Third-year chemistry student, Alex Bytheway, suggested the idea for running a Chemistry Outreach competition to #RealTimeChem curator/organiser Jason Woolford, in response to a call for ideas. Jason, a Royal Society of Chemistry Senior Editor, who tweets as @Doctor_Galactic, accepted the idea and asked Alex to be one of the judges during the week.

#RealTimeChem week, which this year runs from November 12 to 18, is a seven-day event where chemists worldwide tweet about their chemistry as they are doing it, using the #RealTimeChem hashtag and connecting with other chemists around the world in the process. The best tweets in various categories, such as #ChemSelfie, #ChemVideo, #ReactionPic are published in C&EN Magazine and also receive an award.

Explaining how his involvement in this year’s event came about, Alex said:

“I pointed out that the #RealTimeChem community at the moment just concerns chemists, but obviously there’s a much wider audience on Twitter, so why not use hashtags to get chemistry out there a bit more? Jason liked the idea and went to Hindawi, an open access publisher, who offered to donate a tablet as the prize.”

“We exchanged emails on how it was going to fit together, as it all needed to relate to #Chem4Life, which is the theme for this year, and wrote a piece explaining how using simpler, clearer language in the tweets helps make chemistry accessible to a wider audience. So for example if you’re describing filling up an NMR machine, instead of saying 'As part of my job I use cryogenics to cool superconducting magnets', you can say 'I use liquefied gases because they can go to very low temperatures without freezing.’"

Alex has been communicating chemistry on social media since his early teens when he had his own chemistry YouTube channel. His talent was spotted early on when his videos were featured on the RSC’s ChemNet website for 14-18 yr-olds, and he was later given an administrator’s role, facilitating users’ questions and answering them, for which he received an award. Alex has been communicating chemistry ever since in a variety of ways, such as visiting schools on the STEM Ambassador Programme, volunteering at RSC events, and he has also contributed articles to the magazine Chemistry Review.

To participate in the #Chem4Life Outreach Competition, chemists should tweet about their chemistry using the competition hashtags #realtimechem and #chemistry4life, and also include one of the following, depending on the day of the week, to engage a wider audience: #MondayMotivation, #TuesdayThoughts, #WednesdayWisdom, #ThursdayThoughts, #FridayFeeling.

Find out more about #RealTimeChem week and how to participate.