Scientists from the University of York have developed a new synthetic route that delivers significant quantities of two very important sparteine-based chiral ligands that could help in future development of drug molecules. 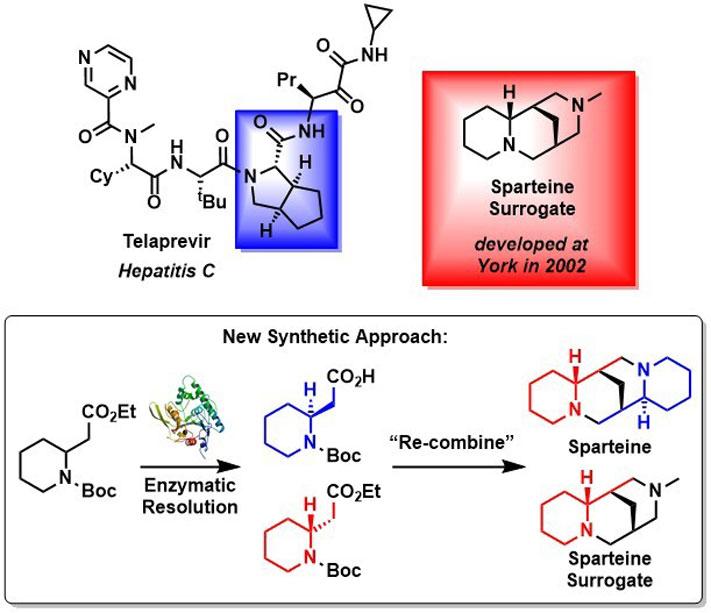 Sparteine and the sparteine surrogate, developed in York in 2002, are chiral ligands with the potential to synthesise mirror-image ‘enantiomeric’ compounds that have been widely used in metal-mediated reactions to tackle complex synthetic problems and generate drug molecules. For example, researchers at Vertex who developed the Hepatitis C drug Telapravir, showed that the sparteine surrogate could be used to synthesise the part of the drug molecule highlighted in blue.

However, there are issues with the long-term supply of both sparteine, which is extracted from scotch broom, and the sparteine surrogate, which derives from cytisine and is extracted from the seeds of the Laburnum tree. Sparteine itself became unavailable in 2010 and has been scarce ever since. Chemists at Vertex recently rejected a multi-kg scale route using the sparteine surrogate since “inquiries about long-term, high-volume supply of cytisine had been met with concerns about production variability, due mainly to reliance on cytisine isolation from natural sources”.

These problems with long-term supply motivated the development of a new approach by Professor Peter O’Brien’s group in the Department of Chemistry at the University of York. Their route uses common feedstock chemicals to make these chiral ligands on an unprecedented scale, moving away from the precarious use of naturally occurring compounds, and hence allowing supply issues to be addressed. Their innovative approach utilises the enzymatic resolution and separation of the mirror-image forms of a simple intermediate. For sparteine, these were then recombined to generate the complexity required in the target ligand.

Dr James Firth, lead chemist on the project, said: “Our approach to the family of sparteine chiral ligands allows synthesis of either mirror-image form on a gram-scale for the first time. Hopefully this will help ease supply issues, helping both fundamental research and drug production”.

The work has attracted attention and recently featured in the popular pharma blog “In the Pipeline” by Derek Lowe.

The research is published in Angewandte Chemie International Edition and was funded by EPSRC, Astra Zeneca and F. Hoffman-La Roche.