A University of York PhD student has won a Silver award at a competition in the House of Commons for the excellence of his chemistry research. 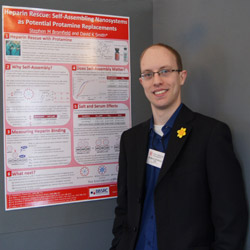 Stephen Bromfield, a third-year PhD Student in York’s Department of Chemistry, presented his research, which looks at reducing side-effects caused by drugs used during surgery, to dozens of politicians and a panel of expert judges, as part of the poster competition SET for Britain.

His research, which involves making biodegradable molecular building blocks to counteract drugs which are used to reduce the risk of blood clots during, for example, heart surgery, was judged against 29 other shortlisted researchers’ work.

Stephen, 24, who received a £2,000 prize, said: "I’m very proud to be awarded this prestigious prize which recognises not only the quality of the research carried out in the Smith group at the Department of Chemistry in York, but also the work that goes into making our results accessible to the non-expert.

“Communication is a vital facet of science and I hope that as a result of the valuable discussions at SET for Britain, politicians and policy makers can begin to realise the vital contributions chemistry can make in solving a wide range of problems."

SET for Britain aims to help politicians understand more about the UK’s thriving science and engineering base and rewards some of the strongest scientific and engineering research being undertaken in the UK.

I’m very proud to be awarded this prestigious prize which recognises not only the quality of the research carried out in the Smith group at the Department of Chemistry in York, but also the work that goes into making our results accessible to the non-expert

Nick Gooch, Managing Director of AgChemAccess, sponsors of the Silver Medal in the Chemistry Section of the Competition, said: “We have sponsored SET for Britain for a number of years, to support the next generation of UK scientists that will be required to enable UK PLC to stay ahead of its global competitors.”

"You’ve all done yourselves proud and the chemical sciences too. And I’m delighted to award those that the judging panel felt stood out as truly exceptional.”

Andrew Miller MP, Chairman of the Parliamentary and Scientific Committee, said: “This annual competition is an important date in the parliamentary calendar because it gives MPs an opportunity to speak to a wide range of the country’s best young researchers.

“These early career scientists are the architects of our future and SET for Britain is politicians’ best opportunity to meet them and understand their work.”