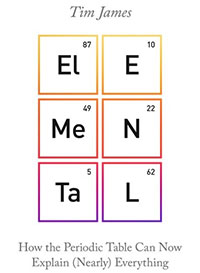 Tim graduated from the Department of Chemistry at the University of York in 2011 with a MChem degree, where he specialised in computational quantum mechanics in his final year project. He is now a secondary-school science teacher, YouTuber, blogger and Instagrammer, teaching science to anyone who will listen. He also gives annual lectures on the topic of popular science for the Institute of Physics.

In Elemental, Tim tells the story of the Periodic Table from its ancient Greek roots, when you could count the number of elements humans were aware of on one hand, to the modern alchemists of the twentieth and twenty-first centuries, who have used nuclear chemistry and physics to generate new elements.

Tim also answers questions such as:

Reflecting on the book, Tim says:

“If you want to understand how our world works, the Periodic Table holds the answers. This book shows you how to use it to understand all the ingredients necessary to make a world.”

The book is collecting a string of five star reviews on Amazon, including:

“Witty, pacy and fascinating, Tim James has a fantastic knack for capturing the magic of science.”