A team of researchers from the University of York Green Chemistry Centre of Excellence have been shortlisted as finalists in the Royal Society of Chemistry’s Emerging Technologies Competition 2014. 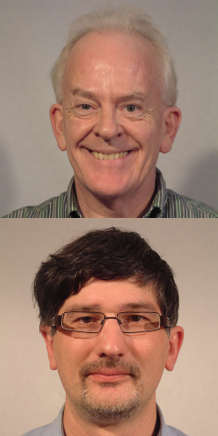 Professor James Clark, Centre Director and Dr Vitaliy Budarin, Principal Scientist, will attend the competition final at the Royal Society of Chemistry’s London headquarters on Piccadilly on 25 June where they will pitch their research ‘Dragon’s Den’ style to commercial experts from renowned scientific multinational companies.

They will battle against 19 other teams to win the top prize of one-to-one mentoring from the competition’s multinational partners and £10,000 prize money – to be presented to the winners by the BBC’s ‘Dragon’s Den’ judge, Richard Farleigh.

The Green Chemistry Centre has developed patented low temperature microwave technology which enables the efficient and selective activation of many types of biomass in to high value chemicals, energy products and materials. Specific activation of biomass structural components ensures the preservation of molecular complexity. The technology is modular, mobile, feedstock agnostic and can be implemented globally.

On being selected as an Emerging Technologies finalist Professor James Clark, Centre Director said: we are delighted that the RSC judges can see the potential in what we believe is a game-changing clean technology in the conversion of waste to valuable chemicals.

As well as cash investments, the Emerging Technologies prizes include expert mentoring, free advertising and access to investor networks.

Dr Aurora Antemir, the Royal Society of Chemistry’s industry programme manager said: “The process of translating a scientific innovation into a product or service that creates value, or that customers will pay for, is difficult.

“The Royal Society of Chemistry recognises the potential of innovators in the chemical sciences to contribute to economic growth in the UK. But we also recognise that it’s really hard for innovators to make that jump from the lab bench to market because they don’t have the commercial know-how.

“That’s why we set up the Emerging Technologies Competition – to connect the brightest ideas in the chemical sciences with commercial expertise in large multinational companies and to the right business networks to make technologies that have big potential more investment-ready.”

As well as mentoring and cash prizes, the Emerging Technologies Competition winners will benefit from a package of free advertising and access to investor networks.