Final year MChem student, Edward Howe, has helped to develop a new drug release gel, which may help avoid some of the side effects of painkillers such as ibuprofen and naproxen. 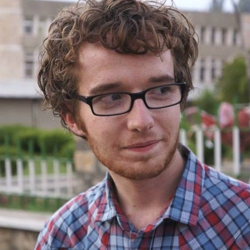 In a final year project, MChem undergraduate student Edward Howe, working in Professor David Smith's research team in the Department of Chemistry at York looked for a way of eliminating the adverse side-effects associated pain-killing drugs, particularly in the stomach, and the problems, such as ulceration, this could cause patients.

Supervised by PhD student Babatunde Okesola, whose research is supported by a Chemistry Wild Fund Scholarship, Edward hoped to create gels which could interact with drugs such as Naproxen, and release them at the slightly alkaline pH values found in the intestine rather than the acidic conditions in the stomach.  His aim was to both protect the pain-killing drugs and help limit some of the side effects they can cause.

The researchers created a new gel, based on small molecules which self-assemble into nanofibers which could interact with a variety of anti-inflammatory, painkiller drugs, including iburofen and naproxen. The research is published in Chemical Communications.

Specific interactions between the gel nanofibres and the drugs meant that high loadings could be achieved, and more importantly, the release of the drug could be precisely controlled.  The gels were able to release naproxen at pH 8 - the value found in the intestine, but not at lower pH values found elsewhere in the body.

Professor Smith said: “Although researchers have used gels before to try and improve the formulation of naproxen, this is the first time that a self-assembling system has been used for the job, with the advantages of directed interactions between the nanoscale delivery scaffold and the drug.  As such, this is the first time that such precise control has been achieved.”

Edward Howe said: “The research really fascinated me. The prospect of being involved in developing a method to reduce the pain of others filled me with great pride. Understanding the interactions between the gel and the painkillers was very interesting and improved my knowledge of supramolecular chemistry.”

The next step for Professor Smith's team will involve stabilising the gel drug delivery systems in the very acidic, low pH conditions found in the stomach so that they can transit safely to the intestine before delivering naproxen just where it is needed.

Professor Smith added: “Perhaps this is something that one of next year's undergraduate project students might solve. As a research-intensive institution, York is committed to its undergraduates carrying out cutting-edge research such as this.”