Chemists discover new clue to the chemical origins of life

Organic chemists at the University of York have made a significant advance towards establishing the origin of the carbohydrates (sugars) that form the building blocks of life. 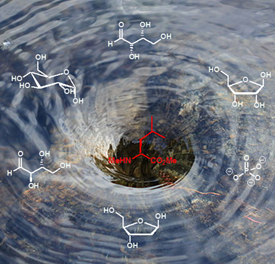 A team led by Dr Paul Clarke in the Department of Chemistry at York have re-created a process which could have occurred in the prebiotic world.

Working with colleagues at the University of Nottingham, they have made the first step towards showing how simple sugars – threose and erythrose – developed. The research is published in Organic & Biomolecular Chemistry.

The researchers found using simple left-handed amino acids to catalyse the formation of sugars resulted in the production of predominately right-handed form of sugars. It could explain how carbohydrates originated and why the right-handed form dominates in nature.

Dr Clarke said: “There are a lot of fundamental questions about the origins of life and many people think they are questions about biology. But for life to have evolved, you have to have a moment when non-living things become living – everything up to that point is chemistry.

“We are trying to understand the chemical origins of life. One of the interesting questions is where carbohydrates come from because they are the building blocks of DNA and RNA. What we have achieved is the first step on that pathway to show how simple sugars –threose and erythrose – originated. We generated these sugars from a very simple set of materials that most scientists believe were around at the time that life began.”