The University of York has awarded a Morrell Fellowship to Tony Wild in recognition of the significant contribution he has made to the University.

Named in memory of John Bowes Morrell, who was at the forefront of the campaign to create a university in York, the Morrell Fellowships recognise the community of benefactors who have made the most significant contributions to the fabric and life of the University. 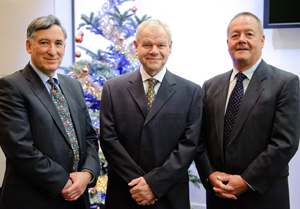 The Fellowship, which was first awarded in 2007, was presented to Tony Wild by York’s Chancellor Greg Dyke at a special ceremony on 9 December.

His very significant donations, made over a number of years, have enabled over 40 additional international students to study at York. They have also helped the University to secure substantial additional funding to develop the infrastructure for chemistry at York.