A collaboration between Chemistry and Computer Science researchers in YCCSA has won a bronze medal and a $2000 prize. 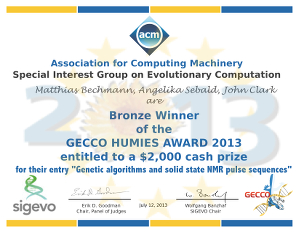 The Human Competitive Awards ('the Humies'), now in their 10th year,  provide an international forum for recognising when the application of evolutionary computation techniques has equalled or surpassed achievements by other means. The competition is held annually at the Genetic and Evolutionary Computation Conference (GECCO).

The team, Matthias Bechmann and Angelika Sebald from Chemistry and John Clark from Computer Science,  demonstrated how  evolutionary computation techniques could be used to optimise radio frequency (RF) pulse sequences for solid-state nuclear magnetic resonance (NMR) spectroscopy.  NMR is the most widely used, versatile analytical and spectroscopic tool for elucidating structure (and function) in areas as wide-ranging as solid-state physics, materials science, biochemistry, or medical imaging.

The work improves a particular approach in solid-state NMR known as 'magic angle spinning' (MAS) NMR. Here, the powdered solid sample is spun rapidly during the experiments around an axis inclined at the 'magic angle' to the direction of the magnetic field (a poor approximation of the rapid and isotropic motion molecules undergo in the liquid phase). MAS improves spectral resolution in solid-state NMR but this gain comes at a price in that motion of the sample container makes the theoretical description of the experiments rather cumbersome - as everything becomes time-dependent. Accordingly, theoretical methods for the design of solid-state NMR pulse sequences traditionally (and out of necessity) often make simplifying assumptions, such as assuming synchronicity of the sample rotation with the timing of the RF pulses. That leads to often very elegant experiments in principle; in practice, however, it turns out that many such experiments perform poorly on 'real world' samples.

The YCCSA team's harnessing of evolutionary computation allows higher performing but non-rotor synchronous pulse sequences to be discovered - challenging the current wisdom about (and theoretical description) of MAS NMR.

Beyond the gains in terms of improving a widely used spectroscopic tool, a NMR pulse sequence can be regarded as a software program targeting  a very specific computational device - an NMR spectrometer. The authors believe a much more comprehensive fusion of ideas form NMR and evolutionary computation are possible and are working on a grant proposal to take the work forward.