Over 9,000 people in the UK suffer from cystic fibrosis, an inherited condition that causes chronic lung infections and a life expectancy of just 37 years. Therapies under development at York could transform the lives of people who suffer from this cruel genetic disorder and the vehicle used to deliver them is only a couple of nanometres across.

Professor David Smith’s research focuses on synthetic nanoscience, deepening our understanding of how substances interact at scales smaller than the size of a human cell, and building molecular devices so tiny that four thousand of them could lie side-to-side across the width of a single strand of spider's web silk.

Professor Smith’s research team in York’s Department of Chemistry has been working on one particular challenge: fixing the genetic defect that leads to cystic fibrosis.

“We know that anomalies in the information encoded in our DNA give rise to a whole range of genetic defects,” explains Professor Smith. “There’s one particular gene that contains instructions for making an essential protein. If that gene is faulty, as it is in people with cystic fibrosis, the resulting protein stops working and so mucus starts to build up around cells. It’s particularly problematic when mucus starts to clog the lungs – they become far more vulnerable to damaging infections.”

As a result, life expectancy for the UK’s thousands of cystic fibrosis sufferers is just 37 years, and current treatments are limited. But Professor Smith thinks we can do better. Recent parallel advances in the sciences of chemistry and microscopy mean that chemists can now design and synthesise nanoscale materials, building unique, self-assembling chemical systems. The aim is to harness these advances to improve treatment for genetic diseases.

“Ideally, if a patient has a particular faulty gene which is causing problems, we should simply be able to insert a replacement fragment of DNA into the patient’s cells with a healthy copy of the gene,” says Professor Smith. “With cystic fibrosis sufferers, for instance, that would prevent mucus build-up and lung damage. But the big challenge is actually figuring out how to deliver the healthy DNA to the target cells.” 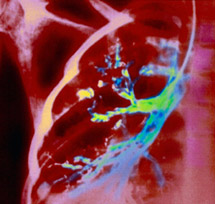 A chest x-ray of a patient with cystic fibrosis. The disease affects the internal organs, especially the lungs, by clogging them with thick sticky mucus (coloured green) which makes it hard to breathe

Oddly enough, one of the challenges of working on the DNA scale is that it is, on a molecular scale, really rather large. After all, the bonds which are familiar to chemists are just a tenth of a nanometer long – so manipulating systems 20 times this size is never easy.

But the team has already had some significant success. Its recent results, reported in the journal Angewandte Chemie, use chemical synthesis to programme small molecule building blocks with key pieces of information. These molecules assemble into nanostructures with multiple arms which bind to fragments of DNA. These structures effectively bind and protect DNA and then act as vehicles to carry it into living human cells. And the vehicles now being tested at York are far more effective at doing this than the best of their predecessors.

“Having cleared that hurdle,” adds Professor Smith, “the problem we’re now facing is that our systems bind to the DNA too well, and won’t release it properly once they’re inside the target cell! So we’re working on designs which are programmed to degrade when they reach the target. If this approach works, the vehicles break down into small, harmless molecules once they’re inside the cell, and the healthy DNA can get to work.”

This research has been supported by EPSRC and BBSRC and Professor Smith is also the vice-chair of a pan-European highly multidisciplinary research network which focuses on developing synthetic nanosystems with applications in medicine. Within this network, which is part of an intergovernmental framework for European co-operation in science and technology, he has extensive collaborations with research teams in Italy and Germany.