Major improvements in the detection of diseases such as cancer and Alzheimer’s are being developed at a pioneering £7m Chemistry research facility due to open officially at the University of York next month. 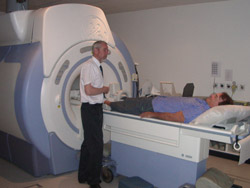 The new purpose-built facility on York Science Park will be opened by Sir William Castell, Chairman of the Wellcome Trust at a ceremony on 11 September. Sir William will also unveil a plaque and give a public lecture on the importance of engineering in medicine.

Over 30 research scientists work at the centre which includes a chemical laboratory and the latest research instrumentation.

The new technique we are developing here at York means that patients who once had to wait days or even weeks for scans to be completed and interpreted can, in some cases, now be diagnosed in hours allowing earlier treatment for serious illness.

The new technique, known as Signal Amplification by Reversible Exchange (SABRE), means that chemical analysis that once took 90 days to record can now be obtained in just five seconds, and detailed MRI images can be collected in seconds rather than hours. It could improve diagnoses and detection in many areas of medicine including cancer treatment, cardiovascular and neurodegenerative conditions.

Professor Simon Duckett from the University’s Department of Chemistry is leading the research, along with Professor Gary Green from the York Neuroimaging Centre (YNiC), supported by a Strategic Award from the Wellcome Trust.

Professor Duckett said the official opening marked a significant milestone in the development of new scanning technologies at York.

“The technique will bring significant benefits to diagnosis and treatment in many areas of medicine and surgery ranging from cancer diagnosis to orthopaedics and trauma. It could ultimately replace current clinical imaging technologies that depend on the use of radioactive substances or heavy metal based contrast.”

The project has gained over £12m investment from the Wellcome Trust, Bruker Biospin, the Engineering and Physical Sciences Research Council (EPSRC) and the University. It combines the world class expertise of research scientists from the University’s departments of Chemistry, Psychology and Biology as well as the Hull York Medical School.