Professor Lucy Carpenter from the Department of Chemistry received an MBE for services to atmospheric chemistry in the Queen’s New Year Honours. 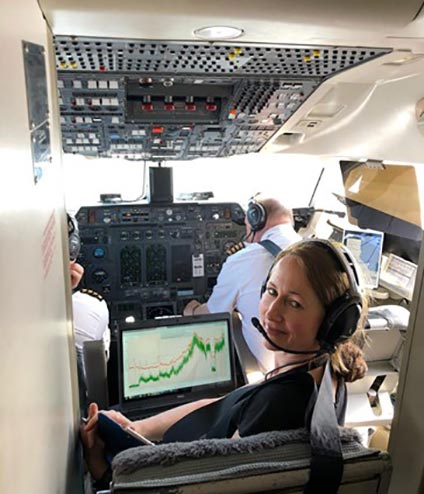 In 2000, Lucy Carpenter was the first atmospheric chemist appointed in the Department of Chemistry. In the years since, she has become Professor of Atmospheric Chemistry and a Fellow of the Royal Society. She has been a winner of the RSC Tilden Prize, Royal Society Rosalind Franklin Prize and a Philip Leverhulme Award.

Professor Carpenter plays a leadership role in the Wolfson Atmospheric Chemistry Laboratories (WACL), established in 2013 - the first centre of its kind in the UK, co-locating over 50 researchers across multiple academic groups, enabling experimental and theoretical studies relating to the science of local and global air pollution, and climate change.

Her own research is world-renowned for work on halogens. She helped to establish that oceanic iodine and bromine mattered in the lower atmosphere, as well as discovering the predominant source of iodine into the atmosphere: chemistry occurring on the ocean surface. She has pioneered an understanding of how this process interfaces with the deposition of ozone to the ocean and delivers atmospherically important trace gases to the marine troposphere.

Professor Carepenter was a co-founder of the Cape Verde atmospheric observatory, which has proven exceptionally powerful in monitoring the signal of changing “background” atmospheric composition over the ocean. Furthermore, she has made key contributions to strategic intergovernmental work on both reactive halogen chemistry and ozone depletion.

Reflecting on her MBE, Lucy said: “I’m delighted and honoured to receive an MBE for services to atmospheric chemistry. I want to thank my amazing team and colleagues at York for being so great to work with and my family for always having their support.”

Head of Department Professor Caroline Dessent said: “It is fantastic to see Lucy’s longstanding service to the Atmospheric Chemistry community has been rewarded with an MBE. She is an outstanding scientist, but has also given extremely generously of her time to support her research community. Excellent science cannot happen without such contributions, which often go unrecognised, so it’s extremely pleasing to see them recognised here.”