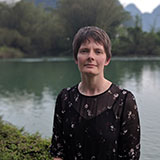 Having completed my MA (Hons) at the University of Glasgow, and my PhD at the University of York, I taught at St Andrews and Hertfordshire before returning to York as a lecturer in 2004. My research focusses on what literary critics and historians call the early modern period, reaching roughly from 1500-1700. I’m interested in questions of materiality and the stuff of the cosmos, and early modern ways of thinking about relationships between humans and the natural world.

My current monograph project considers the liveliness of early modern matter, and its material expressions, and I am supervising PhD theses on early modern biocitizens, and late medieval and early modern attitudes to disability.

Find out more about Helen's work