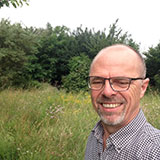 Director of the Leverhulme Centre for Anthropocene Biodiversity

I emerged from rural England where there was little to do other than become obsessed with natural history. After four years completing a PhD on insect evolution in the US and Costa Rica, and two years working on biological invasions in New Zealand, I returned to a postdoc at Imperial College in the UK, followed by academic positions in Birmingham and Leeds, arriving in York in 2004.  I am a Fellow of the Royal Society, and currently President of the Royal Entomological Society

My enthusiasm for LCAB stems from a longstanding desire to understand how the biological world works, how humans have re-shaped the world, and what our future options might be.

I am interested in understanding the biological and human processes that give rise to species being successful, the ways that people exploit them, and the ways that successful species exploit humans. I am also intrigued by our attitudes to successful species, given that the Anthropocene is as much about how humans see our place in the natural world as it is about the biological and physical realities of change. With this in mind, I like to tackle challenging questions. For example, are humans causing new species to come into existence?  Do negative and positive human attitudes to different species have much impact on their fates? And, could environmental management place as much emphasis on fostering novel but diverse ecosystems as on trying to slow the declines of species and ecosystems that are no longer viable in the modern epoch?

Thomas, CD 2019, The development of Anthropocene biotas. Philosophical Transactions Of The Royal Society Of London Series B - Biological Sciences.

Thomas, CD 2017 Inheritors of the Earth: How Nature Is Thriving in an Age of Extinction. Allen Lane (Penguin) and Public Affairs Books

Find out more about Chris' work