Theo Tomking considers issues concerning the role of local knowledge and the opportunities new technologies present for agriculture in discussions of how we can produce food for a ‘better’ Anthropocene.

How we produce sufficient amounts of nutritious food whilst reducing our negative impacts on the biosphere has long been a problem for agriculture. However, the stances taken in response to these issues are often polarised. Just take the aspirations people hold for the efficacy of genetically modified crops with the seemingly incompatible convictions of those advocating for food sovereignty.

The harbinger of such stances on local knowledge and technology transfer has often come to be seen as the Green Revolution and its emergent critics of the 1980s. As the story goes, from the mid-1940s to the 1970s, high yielding varieties (HYVs) of grains were developed at plant breeding programs (mainly in the Philippines and Mexico with funds from US donor agencies) and then taken up and grown by farmers on pretty much every continent on earth.

Accompanied with packages of other technologies such as chemical fertilizers and pesticides, irrigation systems and machinery, the HYVs led to impressive increases in the global production of staple crops like wheat, rice and maize. New technologies for food production had seemingly triumphed against an impending global food crisis brought on by rapid population growth and stagnating agricultural productivity. The transfer of these technologies to new frontiers – mostly in the Global South – was envisioned as the way to increase food production and feed the world.

However, by the 1980s a growing number of commentators came to reject the spirit of technology transfer which had been at the heart of the Green Revolution. According to them, focusing solely on the transfer of agricultural technologies represented a regrettable cultural-evolution style model for affecting change in food production. Instead, they promoted a different vision which sought to put the “farmer first”.

Farmers, they argued, had the capacity to innovate and adapt to changing needs themselves. Thus, scientific research should be used to build upon farmers’ local practices and know-how rather than developing new practices or technologies without their participation. In conversations which typically concerned resource-poor farmers in the Global South, ‘local’ knowledge became increasingly framed as ‘indigenous’ knowledge. Pre-existing indigenous practices, they argued, were grounded in agroecological processes which researchers and policymakers should seek to understand and improve upon.

The idea that this story has framed our contemporary approaches to food production is compelling. Modern-day proponents of agroecology will likely find many of the farmer-first advocates’ arguments convincing. Similarly, the type of vision for technology transfer which was inherent to the Green Revolution likely aligns with the hopes of many for plant biotechnology to palliate the food problems of tomorrow.

However, this narrative does not tell the full story. Remarkably similar discourses have emerged elsewhere throughout history. Tensions between the efficacy of technology transfer and local knowledge in food production have existed in circumstances other than the Green Revolution and the farmer first advocates of the 1980s. As just one example, similar contrasting discourses can be seen in Britain’s efforts to manage food production in its colonies in the 20th century.

Following the Second World War, the Colonial Office in London began to champion a new development agenda for its colonies. A reinvigorated priority was given to centralised state planning and intervention under the guise that increasing the productive capacity of its colonies would generate economic prosperity. Food production was to play a key role.

Large-scale agriculture projects were given a new lease of life in this productionist development agenda, with many projects designed with a renewed emphasis on growing crops for export rather than subsistence. This was partly to meet Britain’s own domestic needs. For example, the monumental Tanganyika Groundnut Scheme (1947-51) saw vast tracts of land in Tanzania converted to peanut cultivation in an attempt to meet Britons’ nutritional shortages in oils and fats.

To implement such huge agriculture projects, the Colonial Office had commissioned surveys and field trials of various fertilizer applications. The results implied that the only way to obtain the agricultural productivity necessary – at scale – whilst also maintaining sufficient soil fertility, was to use technologies such as chemical fertilizers and agricultural machinery.

Given that these were largely absent from Britain’s colonies, chemical fertilizers, tractors and other agricultural machinery were shipped and transported across railways and roads throughout the British Empire. Technology transfer had become a central means through which the Colonial Office aspired to organise its new projects. 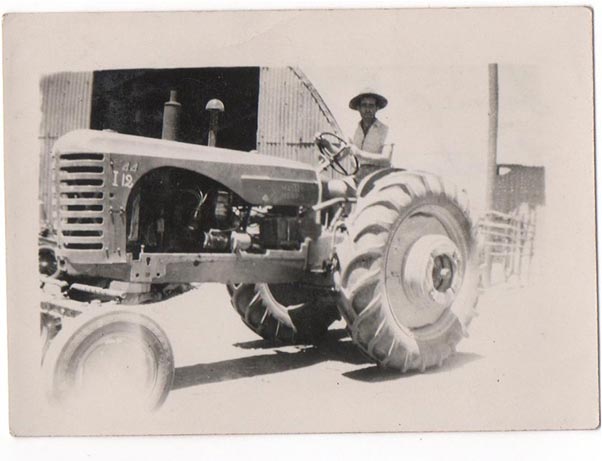 However, not all within the British colonial administration had shared the Colonial Office’s conviction towards technological intervention. In 1933, after a decade in the Nigerian colonial agriculture department, Odin Faulkner and James Mackie published West African Agriculture. In their book, the two agricultural researchers argued that previous efforts to upgrade smallholder agriculture in West Africa were naive because they had ignored local knowledge and practices.

Previous attempts to transpose European practices like deep-ploughing and clean-weeding in places with completely different climates had failed in many circumstances. Like others in various colonial agriculture departments throughout the British Empire, Mackie and Faulkner were convinced that agricultural research had much to learn from the practices of ‘native’ farmers.

They contended that agriculture departments would achieve much better results in yields if they sought to understand the local cultivation practices of farmers in the colonies and then applied scientific methods to improve those practices. Rather than persuading farmers to grow certain crops deemed profitable for trade using methods that had been developed without consideration of each farmer’s cultural and ecological locality, they argued that agriculture departments should try to see the matter from the farmer’s point of view. Would the crops be profitable for the farmer? Is the specific crop variety suited to local conditions? If not, how can better-suited varieties be found or bred?

As champions of the humus school, they also believed that soil fertility could be maintained by building soil organic matter as opposed to applying chemical fertilizers. In their research at Ibadan in Nigeria, for example, they experimented with methods such as green manuring; laying vegetation as a mulch over the soil to decompose and improve soil fertility.

The imperatives of Mackie and Faulkner mirrored the paternalistic notion that Britain had trusteeship over its colonies. Improvement of smallholder agriculture in the colonies was envisioned as means not just to increase their export of crops for the benefit of European industries but as a route towards their material and cultural ‘progress’.

Evidently, the tensions between technology transfer and local knowledge which punctuate contemporary discussions on food production have long and complex histories. The vision to transfer new technologies on a global scale to increase food production was embedded within the British Colonial Office in the late-colonial period and not just the Green Revolution. Similarly, a model for agricultural improvement based on building upon local practices and know-how was shared by both colonial agricultural researchers like Mackie and Faulkner as well as farmer first advocates of the 1980s.

This is not to suggest that the Green Revolution was uninfluential. Nor does this suggest that all contemporary discourses are the legacies of British colonialism. The British colonial example is just one of a vast array of other examples; chosen because its global scale and specific arguments share vivid continuities with the Green Revolution and the farmer first advocates. However, other examples can bring different historical perspectives, such as whether or not local knowledge and technology transfer have always been envisioned as separate approaches rather than compatible elements in a single agenda for food production.

Rather than attempting to find one single origin of contemporary stances on the role of local knowledge or the transfer of technologies in food production, these comparisons show that different actors throughout history have adopted similar visions to those of today when trying to meet their own agendas for food production. All within different socio-economic, political and cultural contexts. With this in mind, history can provide useful examples that translate to our current situation and help us navigate the complex issues of food production we face today.

Tilley, Helen. Africa as a living laboratory: Empire, development, and the problem of scientific knowledge, 1870-1950. Chicago: University of Chicago Press, 2011.