Association for Tropical Biology and Conservation

LCAB supported PhD student, Shuyu Deng recently attended the 58th annual meeting of the Association of Tropical Biology and Conservation (ATBC) in Cartagena, Colombia. She writes about her experience.

This is my first in-person conference since the pandemic began and the first time I have presented my work at an external conference. The ATBC annual meeting has been cancelled and transferred to a virtual meeting in the last two years, it is fantastic that the organisers have finally made it hybrid this year in Colombia, with more than 700 people attending in person and about 300 online from all over the world.

There was a keynote talk every morning, followed by 30+ oral sessions and symposiums and 40+ posters during the four days, all around the theme of tropical diversity conservation and restoration in the Anthropocene. There were also 20+ workshops, discussions and group meet-ups during the lunch and coffee breaks, topics ranging from specific statistic models, and environmental education to wildlife photography skills (and looking for sloths in the nearby park!). It’s really exciting to hear lots of fantastic work has been done in the amazing tropics, and more and more local people started to do research and conservation rather than just be involved as data collectors in the recent 100 years. Actually, it’s not all about the tropics, the studies covered a large spatial and temporal scale. The speakers talked about local biodiversity change as well as applications of global databases (eg. MODIS, LANDSAT - remote sensing data and IUCN, PREDICTS - global biodiversity data) for broader questions, from biodiversity changing patterns between historical data (using museum specimens) and current data across 100 years to a much longer period analysis of charcoal in peatlands during the Holocene. We also got the opportunity to talk about the regional chapter of ATBC, and the different challenges that ecologists in different parts of the world are facing, given my Asian background. These great works and talks told us a socio-ecological resilience story in the changing world. 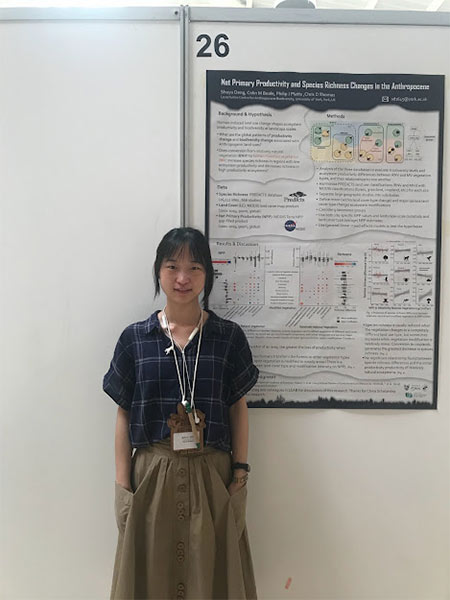 Most of the landscapes across the terrestrial biosphere have now been reshaped by human societies. And land use changes are also critical determinants of biodiversity at the global scale. Multiple studies have explored the relationship between land use change and biodiversity change at a global scale, but they have identified only the biodiversity changes from ‘primary’ vegetation to modified vegetation, and have not considered whether transitions from different types of relatively natural vegetation may differ. Here we harmonised the land use classifications from PREDICTS database and MODIS land cover maps and defined minor and major ecosystem modifications, which enabled us to identify individual land use transition types and then test whether human alteration net primary productivity could be a mechanism underpinning biodiversity change. 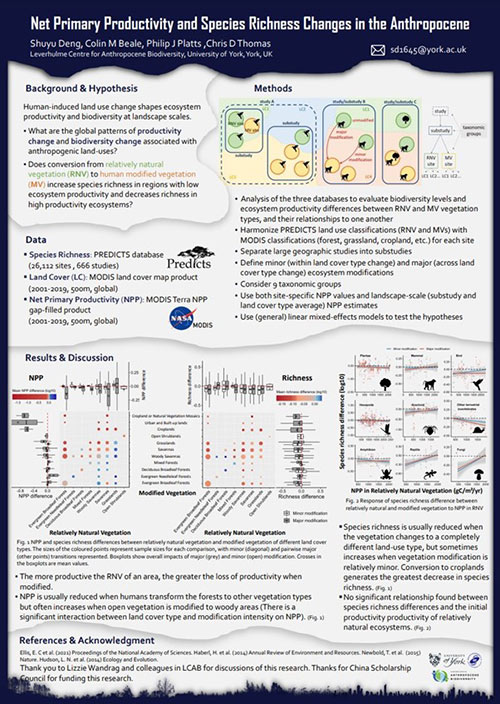 I am very thankful for the hard work of the ATBC organisation team; it was so great to hear so many extraordinary studies from all over the world. Thanks to my funder (CSC) and LCAB for supporting me in attending this conference.