Since television often operates with a rapid turnaround in production, and frequently affords the actor limited time for rehearsal, there has been a tacit understanding that there is minimal ‘craft’ to television acting. Yet television performance is celebrated and some of the most well known and loved characters are created for television.

This project is the first detailed research into how actors approach the specific demands of television. Most research into this area views performance via analysis of the finished product. By contrast, this project uses interviews with celebrated television actors including Rebecca Front (The Thick of It, War and Peace, Humans), Julie Hesmondhalgh (Coronation Street, Broadchurch, Happy Valley), Ken Stott (Fortitude, The Missing, Rebus), Penelope Wilton (Doctor Who, Downton Abbey, Brief Encounters) and Nina Sosanya (Last Tango in Halifax, W1A, Silk). These interviews focus on their process, and how they bring their skills to bear on this particular medium. 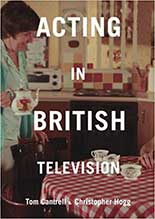 Exploring Television Acting is an edited collection of essays. Bringing together scholarly and practitioner perspectives, the book analyses the experiences, skills and techniques of actors when working on television.