A Wide-band Hybrid Antenna for Use in Reverberation Chambers

In most cases the antennas used in reverberation chambers are of types that were originally designed for other test environments or other applications. In particular, the radiation pattern of an antenna used in a reverberation chamber is of less importance, since in a well stirred chamber the average antenna pattern tends to isotropic and the vector averaged input reflection coefficient is identical to the free-space value. We therefore consider the ideal antenna to be one with a compact form-factor, which has a low reflection coefficient whilst operating over the full frequency range of a typical chamber.

We developed a hybrid antenna that operates in the frequency range from 200 MHz to 25 GHz as defined by the magnitude of its input reflection coefficient being less than -10 dB. The antenna is designed to exhibit high efficiency and can be operated mounted either within the working volume of the chamber or as a wall mounted antenna.

Currently a commercial version is being developed by our spin-out company, York EMC Services.

The antenna is described in detail in our award winning paper presented at the IEEE EMC symposion in 2013: 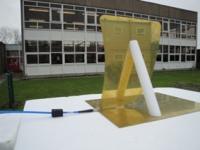