Scientists have discovered the precise way detergents break biological membranes, which could increase our understanding of how soaps work to kill viruses like Covid-19. 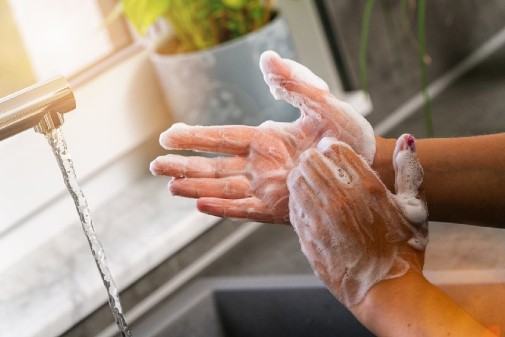 The scientists, from the University of York, discovered how detergents change the shape of biological membranes, and how these changes then lead to their collapse.

Detergents play a role in everyday life, from removing tough stains and cleaning messy hands to fixing sticky locks. On the nanoscale, they are extremely destructive, and only a few droplets in water can rupture and kill living organisms. This property has led to their widespread use and many soap formulations have been developed to kill disease-carrying viruses, including Covid-19.

Dr Steve Quinn, from the School of of Physics, Engineering and Technology at the University of York, said: “Understanding the precise molecular-level mechanisms through which detergents work may help us better design antiviral agents that can combat disease at the earliest possible stage.”

“We realised that the same tools and techniques we developed to understand how proteins disrupt cell membranes in Alzheimer’s disease could also be used to understand the general mechanisms of detergents. This now opens up an exciting avenue of research, and gives us an opportunity to identify types of different membrane structures that may be detergent resistant.”

For the study, the scientists looked at the detergent Tween-20, which is a key protective ingredient in many products such as handwashes.

Detergent molecules like Tween-20 are shaped like an ice cream cone. At the top of the cone is a region that interacts strongly with water, and at the bottom a group of atoms repel water and form a pointed tail. When you wash your hands with soap, an army of detergent molecules surround the bacteria and viruses on your skin, and in an attempt to escape the surrounding water, they scurry towards and bombard them, tails first, squeezing their membrane envelopes and breaking them apart.

The chemical properties of detergents have been studied in detail, but until now the precise, molecular level details of the interaction have been difficult to assess because of a lack of tools and techniques capable of capturing the entire process.

Dr Quinn and his research team have now developed a series of methods to try and learn more about these important interactions. His team create a series of highly-controllable membrane balls, and they use a molecular nanoruler known as single-molecule FRET (fluorescence resonance energy transfer), to measure how constituents of the membranes move apart during their interaction with detergents.

The team discovered that after Tween-20 binds to the membranes, the balls expand significantly and pores form on their surface before they completely fragment.

To confirm their findings, the researchers used computer simulations to model how the membranes evolved.

Dr Quinn added: “The experimental results from different approaches matched up extremely well, and the molecular dynamics simulations allowed us to extract otherwise hidden physics governing the process. The culture of interdisciplinarity within the Physics of Life group at York was truly pivotal for this work.

“The idea that only a handful of detergent molecules could cause such dramatic shape changes was really quite surprising.”

You can read more about the research team’s work here.