Marilyn Monroe had one naturally, and so does Madonna. Cindy Crawford, Eva Mendes and Rachel McAdams have them too. Burlesque star Dita Von Teese wanted one so badly that at 18 she had it tattooed on. 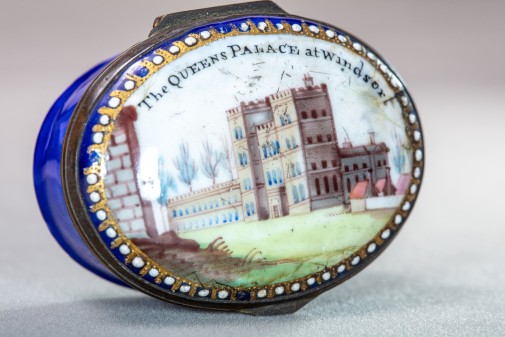 What are they? – facial pigment marks, otherwise known as beauty spots. But if you happened to live between the 16th and 19th centuries, you’d probably have called them ‘patches.’

Now a new virtual museum, the Digital Museum of Dress Accessories (DMDA) dedicated to dress and fashion accessories, is set to launch with the story of the patch and its accompanying box.

For those not blessed with their own beauty marks, patches could be cut from fabric and worn with the help of adhesive gum. But they didn’t only enhance good looks; patches were also used to cover scars and alleviate health problems. But where they get extra interesting is with the development of their container, the patch box.

Patch boxes were small enough to hold in the palm of the hand, and – something that until now has not been appreciated – vastly outlived the fashion for the patches themselves. Initially made of luxury materials which were sourced from around the globe, patch boxes were collectible delights in miniature, bought, sold, and stolen. Cheaper varieties were soon produced and a mass market was born.

Co-lead on the project, Dr Cordula van Wyhe from the Department of History of Art said: ‘When we started looking we were unsure what we would discover, but it turned out that these charming little boxes tell big stories.’

In particular, enamelled boxes from the eighteenth and nineteenth centuries became an ideal vehicle for a huge range of uses and users. Complete with affectionate or improving mottos, they were given to friends, family and lovers. Some carried slogans or moral messages, including those produced in the fight against slavery. Others commemorated great events such as battles and the deaths of famous leaders. Some carried visual jokes. And a staggering number were made as souvenirs, supplying mementoes for the rapidly expanding tourist phenomenon.

For something so ubiquitous and long-lasting, general knowledge about the patch box has sunk without a trace. The DMDA and its collaborative partners,York Castle Museum and the Leeds Museums and Galleries are set to change this.

The DMDA’s patch room is the pilot stage of a major research project that aims to expand the museum across a rich range of historical dress accessories. The plan is that these will be explored through a sophisticated digital portal.

Co-lead, Dr Susan Vincent, research associate at the Centre for Renaissance and Early Modern Studies, said: ‘Drawing on expertise across the humanities and sciences, the DMDA will tell the many stories behind these objects and their use.  If patch boxes are here to whet the appetite, just wait to enter the world of the flea catcher, the nutmeg grater, and the skirt-lifter.’

To find out more about the Digital Museum of Dress Accessories: Body — Fashion— Health — Technology, please go to  https://dmda.york.ac.uk/