Research investigating how the brain responds to visual patterns in people with autism has shown that sensory responses change between childhood and adulthood. 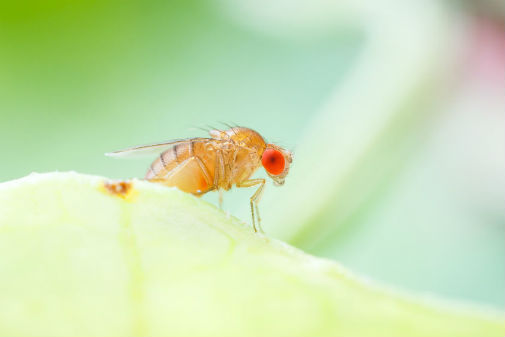 Sensory issues in autism can be modelled in fruit flies

The differences observed between adult and young people mimicked those seen in a strain of fruit flies that had a genetic change associated with autism and other developmental conditions.

This demonstrates that sensory issues in autism can be modelled in fruit flies, providing an opportunity to further understand the complexities of the condition.

Individuals with autism often report sensitivity to bright lights and loud sounds, as well as a variety of other sensory disturbances and differences. These can lead to problems in their everyday life, for example they might avoid bright or noisy environments.

Currently, however, there is limited research on the underlying mechanisms to explain why people with autism experience discomfort during some sensory experiences.

To investigate this, the researchers asked both children and adults, with and without autism, to look at patterns on a computer screen that flickered at specific rates.

They then measured the way that neurons in the participant’s brain responded to the flickering patterns using an electroencephalogram (EEG), which detects electrical activity in the brain.

Dr Greta Vilidaite, who completed the study whilst doing her PhD at the University’s Department of Psychology, said: “Some neurons in the visual parts of the brain fired at the same frequency as the flickering patterns - at five times per second for example, while other types of neurons responded at twice this frequency.

“In adults with autism, and in our mature mutant flies, we found a reduction in brain activity at this higher frequency compared to control participants. In children, and in juvenile flies, responses were lower at both frequencies.

“This suggests that sensory differences may change during development, perhaps through some process of compensation or adjustment.”

The new findings, part of a collaboration between the University of York and Stanford University, helped scientists understand the link between the differences in brain activity in adults and children, and a specific genetic change, associated with autism, as modelled in fruit flies.

The findings will allow future studies to understand the precise mechanisms involved in how sensory perception is affected in autism and whether the difference in brain responses between adults and children has any impact on how they perceive visual or other sensory stimuli.

Dr Chris Elliott, from the University of York’s Department of Biology, said: “We now have a clearer picture of one sensory difference and have a genetic fly model that reflects this same difference.

“It is possible that in future the fruit fly model could be used to test potential treatments to alleviate some of the sensory difficulties experienced by people with autism.”

The research, funded by the Wellcome Trust, the Simons Foundation, and the Experimental Psychology Society, is published in the journal Proceedings of the Royal Society B.