Water supply is the most pressing environmental issue facing the United States according to a survey of policy makers and scientists revealed in a new publication in BioScience by researchers at the University of York and the University of California, Davis. 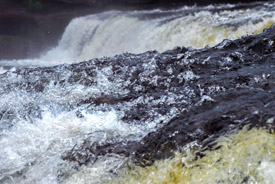 A question on the water supply necessary to sustain human populations and ecosystem resilience was ranked as having the greatest potential, if it was answered, to increase the effectiveness of policies related to natural resource management in the United States. The publication comes as California suffers its worst drought in nearly half a century.

The question emerged from a previous collaboration among decision makers and scientists that yielded 40 research questions that most reflected the needs of those with jurisdiction over natural resources. That research also was published in BioScience.

The survey, by Dr Murray Rudd of the Environment Department at York and Dr Erica Fleishman, of the John Muir Institute of the Environment at UC Davis, asked managers, policymakers and their advisers, and scientists to rank the questions on the basis of their applicability to policy.

Other questions that were ranked as of high importance to policy included those on methods for measuring the benefits humans receive from ecosystems; the effects of sea-level rise, storm surge, erosion  and variable precipitation on coastal ecosystems and human communities; and the effect on carbon storage and ecosystem resilience of different management strategies for forests, grasslands, and agricultural systems .

Dr Rudd said, “We found a significant difference in research priorities between respondents. Importantly, there was no evidence of a simple science–policy divide. Priorities did not differ between academics and government employees or between scientists (academic and government) and policymakers.

“Our results suggest that participatory exercises such as this are a robust way of establishing priorities to guide funders of research and researchers who aim to inform policy.”

Dr Fleishman added, “The consensus in priorities is even more striking as California’s current drought leads to unprecedented reductions in water supply and delivery.”