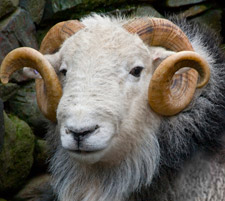 The research, led by The Sheep Trust, a national charity based at the University of York, is the first of its kind to compare the genetics of three commercially farmed breeds all concentrated in the same geographical region of the UK.

Scientists worked with hill farmers to explore the genetic structures of Herdwicks, Rough Fells and Dalesbred, breeds locally adapted to the harsh conditions of mountains and moorlands.

The study, published in PLOS ONE, discovered that Herdwicks contained features of a 'primitive genome', found previously in very few breeds worldwide and none that have been studied in the UK mainland. The data suggest that Herdwicks may originate from a common ancestral founder flock to breeds currently living in Sweden and Finland, and the northern islands of Orkney and Iceland.

Herdwicks and Rough Fell sheep both showed rare genetic evidence of a historical link to the ancestral population of sheep on Texel, one of the islands in the Wadden Sea Region of northern Europe and Scandinavia.

Local Cumbrian folklore speaks of connections between the Herdwicks and Viking settlers. The coming together of the genetic evidence with historical evidence of Viking raiders and traders in the Wadden islands and adjacent coastal regions, suggests the folklore is right but extends the connection to Rough Fells.

One outcome of the scientific study united the three hill breeds. The Herdwick, Rough Fell and Dalesbred each showed a lower than average risk of infection to Maidi Visna, a virus causing a slow-acting disease affecting millions of sheep worldwide with massive welfare and economic impacts. These new data provide evidence to support suggestions that the native hill breeds are less susceptible to the virus.

Mainstream agriculture is looking to locally adapted breeds of livestock to increase resilience to new pressures from climate change and the need to protect food security but at lower cost. The study demonstrates the potential these breeds offer in providing novel genetic traits that may help sheep farming in the future.

Professor Dianna Bowles, an Emeritus Professor in the Department of Biology at York and Chair of The Sheep Trust, led the study.

She said:  “This is an important start to show policy makers just how important the genetics of these breeds may be. Currently the sheep are farmed in large numbers and it is essential we take steps to ensure a commercial future for them, since they have the traits and adaptations to harsh conditions that agriculture might well need in years to come. If the breeds are lost we lose forever the opportunities offered by this crucial biodiversity.”

Amanda Carson, a vet and Secretary of the Herdwick Sheep Breeders Association, added: “We all hope the results will help to convince Government of the importance of the genetic distinctiveness of these breeds. They enable low input farming and food production on land unsuitable for other forms of agriculture. They are a tremendous asset and we should look after and promote their farming for future national food security.”