An international team of researchers including scientists from the University of York have discovered a ‘microbial Pompeii’ preserved on the teeth of skeletons around 1,000 years old. 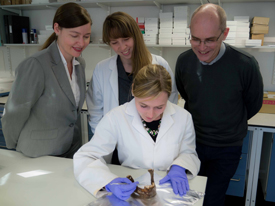 The key to the discovery is the dental calculus (plaque) which preserves bacteria and microscopic particles of food on the surfaces of teeth, effectively creating a mineral tomb for microbiomes.

The research team discovered that the ancient human oral cavity carries numerous opportunistic pathogens and that periodontal disease is caused by the same bacteria today as in the past, despite major changes in human diet and hygiene.

The researchers discovered that the ancient human oral microbiome already contained the basic genetic machinery for antibiotic resistance more than eight centuries before the invention of the first therapeutic antibiotics in the 1940s. As well as health information, the scientists recovered dietary DNA from ancient dental calculus, allowing the identification of dietary components, such as vegetables, that leave few traces in the archaeological record.

The research published in Nature Genetics reveals that unlike bone which rapidly loses much of its molecular information when buried, calculus grows slowly in the mouth and enters the soil in a much more stable state helping it to preserve biomolecules. This enabled the researchers, led by Dr Christina Warinner, to analyse ancient DNA that was not compromised by the burial environment.

They applied shotgun DNA sequencing to dental calculus for the first time. They reconstructed the genome of a major periodontal pathogen and produced possibly the first genetic evidence of dietary biomolecules to be recovered from ancient dental calculus.

Analyzing this wealth of data required overcoming the formidable bioinformatics challenge of sorting and identifying millions of genetic sequences like puzzle pieces in order to reconstruct the complex biology of the ancient oral microbiome. “Dental calculus is a window into the past and may well turn out to be one of the best-preserved records of human-associated microbes," says Professor Christian von Mering, an author of the study and Group Director at the SIB Swiss Institute of Bioinformatics, which performed the bioinformatics analysis

Professor Matthew Collins, of the BioArCh research centre in the Department of Archaeology at York, said: “We knew that calculus preserved microscopic particles of food and other debris but the level of preservation of biomolecules is remarkable.  A microbiome entombed and preserved in a mineral matrix, a microbial Pompeii.”

Dr Warinner, of the University of Zurich and the University of Oklahoma, added: “Dental calculus acts both as a long-term reservoir of the oral microbiome and as a trap for dietary and environmental debris. This allows us to investigate health and disease, as well as reconstruct aspects of an individual’s life history and activities. Never before have we been able to retrieve so much information from one small sample.”

The study has wide reaching implications for understanding the evolution of the human oral microbiome and the origins of periodontal disease. Periodontal disease causes distinctive proteomic changes in the dentition and is characterized by chronic inflammation resulting in tooth and bone loss. Dr Enrico Cappellini of the University of Copenhagen, a senior author of the study, describes the dental calculus analyzed in this study as a kind of “battlefield archaeological site, just at the molecular scale.”

Today, moderate to severe periodontal disease affects more than 10% of the world’s population and is linked to diverse systemic diseases, including cardiovascular disease, stroke, pulmonary disease, and type II diabetes. Although common in humans, domestic pets, and zoo animals, periodontal disease does not typically develop in wild animals, leading to speculation that it is an oral microbiome disease resulting from modern human lifestyles.

“As we learn more about the evolution of this microbiome in response to migration and changes in diet, health and medicine, I can imagine a future in which most archaeologists regard calculus as more interesting than the teeth themselves,” says Professor Collins.

Dr Yvette Hancock, of the Department of Physics at York, used Raman spectroscopy to study of ancient dental calculus -- a world-first application of the method.

The research was part-funded by the Wellcome Trust [ref: 097829] through the Centre for Chronic Diseases and Disorders (C2D2) at the University of York.