An international team of scientists has used detailed analysis of ancient and modern DNA to show that the distribution and lack of genetic diversity among modern European beavers is due largely to human hunting. 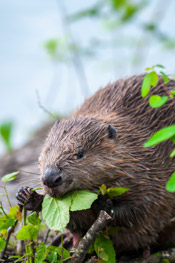 The research, which was led by University of York researcher Professor Michi Hofreiter, provides important new insights into the genetic history of the Eurasian beaver Castor fiber. Crucially, it shows the European beaver has been strongly affected by expanding human populations for many thousands of years.

The research, which also involved researchers from Germany, USA, Norway, New Zealand, Russia, Poland, Sweden, Austria and the Netherlands, is reported in the journal Molecular Ecology.

Through DNA sequencing, the research team discovered that the Eurasian beaver can be divided into three distinct groups. The two main ones are in western and eastern Europe, with a now extinct, and previously unknown, third group in the Danube basin. This population existed at least 6,000 years ago but went extinct during the transition to modern times.

Professor Hofreiter, from York’s Department of Biology and the University of Potsdam’s Faculty of Mathematics and Life Sciences, said: “While beaver populations have been growing rapidly since the late 19th century when conservation efforts began, genetic diversity within modern beaver populations remains considerably reduced to what was present prior to the period of human hunting and habitat reduction.

“In addition, the rapid loss of diversity prior to conservation efforts appears to have established a very strong pattern for the geographic distribution of genetic diversity among present-day beaver populations.”

After centuries of human hunting, the Eurasian beaver had disappeared from most of its original range by the end of the 19th century, with only an estimated 1,200 beavers remaining.

The research team set out to discover whether the lack of genetic diversity and strong phylogeography (geographic distribution of genetic diversity) seen today are the result of its near extinction, or already existed prior to the reduction in its range. To do this, they examined DNA from 48 ancient beaver samples, ranging in age from several hundred to around 11,000 years old, and 152 modern DNA sequences.

The experimental work was carried out in Leipzig, Germany. Corresponding author Dr Susanne Horn, from the Max Planck Institute for Evolutionary Anthropology, Leipzig, said: “We found that overall there was more genetic diversity in the past. Apparently, already in ancient times an ancient contact zone existed between the eastern and western populations of beavers in the Oder River area. This is close to a present-day contact zone in Germany and Poland.”

The work was supported by the Max Planck Society and the Volkswagen Foundation.