Cone snails are for life and not just at Christmas

Those who fly to tropical shores this Christmas in search of sea and sun, may be unaware that an exotic shell picked from the beach could potentially bring relief to many thousands of people suffering life-threatening illnesses. 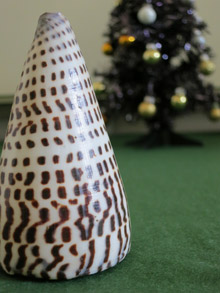 But cone snails, as they are known from their shape, are unprotected and under increasing threat of extinction according to a pioneering new study by researchers at the University of York, UK. Their loss could rob future generations of an, as yet, undiscovered reservoir of pharmaceuticals.

Cone snails live in warm tropical seas and manufacture powerful venom to immobilize their prey of fish, worms and other snails.  Scientists are using these neurotoxins increasingly for research into the development of life-saving drugs.

Across the world, however, tropical marine habitats are being lost due to coastal development, pollution, destructive fishing and climate change, resulting in rapid species loss.  A new global assessment of all 632 species of cone snails for the International Union for the Conservation of Nature (IUCN) Red List by researchers from the Environment Department at the University of York -- the first for any group of marine snails -- finds that some species are at imminent risk of extinction. Research, published this week in PLOS ONE http://dx.plos.org/10.1371/journal.pone.0083353, disproves the notion that the vastness of the oceans assures the survival of marine species. It reveals clusters of species occupying small areas that could quickly disappear as threats escalate.

Blessed with beautiful and coveted shells, cone snails have been collected for hundreds, possibly thousands of years -- cone shells have been found in ancient Neolithic sites and there is a Rembrandt etching of a cone shell from 1650. Rare specimens change hands for thousands of dollars, a popularity which brings welcome income to thousands of poor people who hunt for shells for sale to dealers and tourists.

More importantly, during their evolution, cone snails have developed complex venoms, some powerful enough to kill people. Scientists are now using these for research into novel drugs for the diagnosis and treatment of a wide range of pernicious medical conditions including intense chronic pain, epilepsy, asthma and multiple sclerosis.

Lead author, Howard Peters, of the Environment Department at York, says:  “Cone snails are seeing rapid shrinkage of their habitats as human impacts multiply. We found that 67 species are currently threatened or near-threatened with extinction worldwide, but this rises to nearly half of all species (42) in the Eastern Atlantic, where there is an extraordinary concentration of range-restricted species. In Cape Verde, 53 species are found nowhere else in the world of which 43 live only around single islands. Here, pollution and shoreline construction for the expanding tourist industry threaten their existence. Sand is being dredged from the shallows where cone snails live to make concrete for resorts, harbours and cruise liner terminals.  Collection of shells by divers and snorkelers could hasten their demise.”

The study found an almost complete lack of protection for cone snails anywhere in the world.

Howard Peters says: “Despite their extraordinary beauty and value, cone snails have fallen completely underneath the conservation radar. These snails need swift action to protect their habitats and publicise the dire consequences of irresponsible shell collecting of the most threatened species. Holidaymakers need to think twice before taking a seashell home as a souvenir.”

Co-author Professor Callum Roberts adds: “This study provides an important yardstick from which to measure our growing impact on molluscs, one of the richest groups in the sea, and the long-term consequences of ocean acidification. Ocean acidity is increasing due to fossil fuel burning as carbon dioxide dissolves in the sea. Without action to reduce emissions, rising acidity could cause shelled marine creatures to literally dissolve away by the end of this century.”