The manager of the University of York’s IT Academy is heading back to Haiti to deliver computer training for young people involved in recovery efforts following the earthquake which devastated the country in 2010. 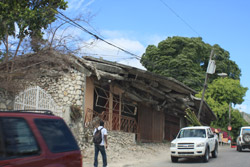 Andrew Bettany first visited Haiti a year after the quake which claimed over 150,000 lives and destroyed buildings across large areas of the country. He delivered IT training to computer science students as part of a six-month programme to help them back into work.

Now he is returning to the capital, Port au Prince, to train students to become IT trainers with the aim of raising computing skill levels across the population.

From 2 November, he will deliver an intensive two-week Windows IT  ‘boot camp’ to 35 young people from the Portail de l'Ecole Supérieure d'Infotronique d'Haïti (ESIH), a technology college in Port au Prince. His visit is supported by NetHope, a global charity which uses digital technology to help people in the developing world.

Andrew Bettany explained: “A large part of the country’s workforce died in the earthquake leaving a shortage of people with key skills, such as IT, which are required to help the country recover from the disaster.

“The first course aimed to equip the students with skills that would improve their chances of getting jobs. It was incredibly rewarding work but I suggested that it would be even more valuable if we trained the trainers and generated a pool of expertise within the country. There is still an acute skills shortage and this latest course is a step towards helping the Haitians overcome that problem.”

The young people undergoing the training are employed by Non Governmental Organisations involved in the recovery work. Two of Andrew Bettany’s former students from his first training visit will be assisting with the classroom teaching.

“The first time I visited I was surrounded by a scene of utter devastation with buildings flattened, the streets full of rubble and people living in tented villages. It will be interesting to see what conditions are like now in Port au Prince and what progress has been made since the earthquake struck,” he said.

“It’s great to be an ambassador for the University and to use knowledge to help in a very practical way.  Computing skills and IT will not solve all the issues facing the country but they will play an important role in improving employment prospects and raising the skill levels of the workforce who are involved in the recovery efforts.”