A visit from Helen Boaden, Director of BBC News

Helen Boaden, Director of BBC News and an honorary graduate of the University, knows all about the value of timing. 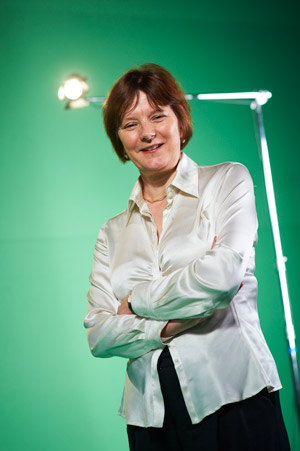 So it was with a wry smile that she arrived at the Department of Theatre, Film and Television's new building on Heslington East. Ms Boaden was to take part in a debate, chaired by University Chancellor Greg Dyke (former director-general of the BBC) on the future of investigative journalism.

On the panel with Helen Boaden were Ian Bloom, Head of Corporate and Media at Ross and Craig solicitors; Simon Singh, an author, TV producer and journalist; and Dr David Levy, Director of the Reuters Institute for the Study of Journalism.

At the time, the BBC was embroiled in media controversy over a Panorama exposé of alleged corruption in football's world governing body, FIFA.

But as she prepared to join the panel of experts Helen Boaden was unequivocal in her defence of the BBC's journalistic integrity, while recognising their responsibility to the licence payer.

"Because of the way we're funded we're very lucky that we can still perform what we know the audience really values, which is to get beyond the journalism of record into things that are of public interest which may not be easy to deliver. We need to make sure we get the journalism right and publish in a timely manner," she says.

We’re much tougher on ourselves about where we put our money than 25 years ago. I don’t think that’s a bad thing. It’s the public’s money and you want to invest it wisely.

She emphasises that the BBC remains "extremely committed to investigative journalism", despite the fact that it can be extremely expensive. She acknowledges that financial constraints have made it more difficult for many media outlets to engage in detailed investigations.

"I think it would be true to say that we’re much tougher on ourselves about where we put our money than we might have been 25 years ago. I don’t think that’s a bad thing. It's the public's money and you want to invest it wisely in your journalism."

Impressions of the Department of Theatre, Film and Television 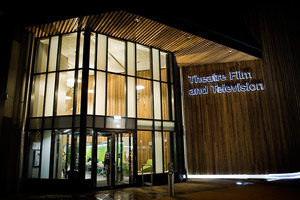 It is the second time Ms Boaden has been to the Department's new home – it was still a building site on her first visit though, even then, she was impressed by its use of space. So what are her impressions now it is complete?

"It's incredibly distinctive and draws the eye. This building, I think, is very daring and quite brutalist in a way that I like. I do genuinely believe that it’s been done with fantastic imagination and confidence," she says.

The Department's range of activities and its ambition are equally impressive, she says, particularly as the BBC with its imminent new base in Salford will be interested in good facilities and any good students coming out of universities across the North. She says TFTV's combination of practicality and theory will help graduates to secure jobs across the creative industries.

I like the ambition of York, that it wants to grow with an emphasis on quality.

"It wants young people to emerge who understand television or understand media but actually can also innovate and develop and be flexible. You want people who could both understand the discipline but think beyond the discipline.  There’s a spirit about somewhere like York which I think is genuinely about creativity and innovation based on rock solid good skills. I like the ambition of York, that it wants to grow with an emphasis on quality."

Her visit is very much a return to familiar territory for someone who cut their broadcasting teeth in local radio in Yorkshire. She had spells on commercial stations, Radio Tees and Radio Aire before moving to the BBC Radio in Leeds.

"I remember covering the Leeds Carnival something like the fourth year in a row and thought it's time to move on, much as I love it. But I still have lots of friends across Yorkshire."

The University awarded Colchester-born Ms Boaden an Honorary Degree in 2004, but her connections with York go back much further. Her father was born in York and she has two aunts still living in the city.

"My dad was very much a Yorkshireman and we used to spend our holidays here as children on the coast - Saltburn, Filey, Whitby. We used to get the train up which used to take up to six hours. So Yorkshire is in my soul, really."

Ms Boaden and her husband own a house in the shadow of Scarborough Castle that they use as an escape from then pressures of the capital and a base for exploring.

"My husband and I absolutely love walking and Yorkshire - you've got coast, moors and dales: you couldn’t really do better."