Dinner with Kant: medicine for the mind

Mentioning reality television and Immanuel Kant in the same breath might alarm philosophy purists, but Kant would have a thing or two to teach the contestants on a programme such as Come Dine With Me, according to one University of York academic. Dr Alix Cohen is unafraid to draw the parallel between that modern televisual phenomenon and the 18th century German philosopher. 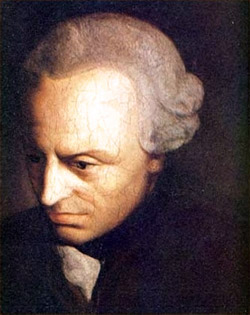 Dr Cohen, a lecturer in the Department of Philosophy at York, is deadly serious when she suggests Come Dine With Me is the modern counterpart of what Kant defined as the ultimate experience for human beings – namely, dinner parties.

In a paper in the History of Philosophy Quarterly, Dr Cohen defends Kant’s assertion that dinner parties are part of the “highest ethicophysical good” by arguing that they represent our only opportunity for civilized bliss. “It’s about sharing moments with family and friends and finding meaning in human relationships. When they are fully realised, dinner parties encompass all the dimensions of human life,” she says.

Despite his legendary, and supposedly boring, predictability, Kant practiced what he preached, and his talents as host were celebrated in 18th Century Konigsberg (now Kaliningrad). His dinner parties were the place to be seen, and the cognoscenti of Konigsberg yearned for an invitation to sit at his table.

Ever faithful to his reputation, Kant’s rules for the perfect dinner party are numerous, sometimes intricate and cover all the dimensions of the event, from food and drink to guests, conversation topics, and even entertainment.

Even the use of alcohol has its place – unsurprisingly, Kant deplored drunkenness because it discouraged sociability, the exchange of thought and was a betrayal of our duty to respect ourselves. Nevertheless, and this may surprise many readers familiar with Kant’s reputation, he thought moderate drinking could be morally beneficial.

Cohen explains that whilst inebriation made human beings ‘like mere animals’, mild intoxication – to loosen the tongue – was acceptable and even encouraged. Nevertheless, Kant insisted that this should only be for a brief period and as long as the drinker was good-natured and the intoxication allowed sincerity and sociability rather than licentiousness and debauchery.

Politeness was thus an essential element of the dinner party, according to Kant. He believed that politeness in social intercourse helped to constrain passions which harmed reason. But sociability had to be kept in check for it to remain virtuous in Kant’s terms.

Kant was convinced that conversation provided intellectual stimulation – he refers to it as a ‘refreshing play of thoughts’. Dining alone, on the other hand, means such opportunities are squandered. Social gatherings, he says are ‘a veritable medicine for the mind’. Kant acknowledged that not everything made for good dinner party conversation, though he agrees with the English that the weather is always a safe starting point. Gossip about human nature and others’ behaviour, for instance, could be both entertaining and educational.

He lays out some broad rules for dinner party conversation – it must focus on common interest and include all the guests. There should also be implicit social contracts of trust and security to allow people the freedom to articulate their thoughts without inhibition.

Cohen says one thing that Kant studiously avoids is any direct discussion of who makes the best dinner party guests.  He says, however, that ‘the number of companions must not be fewer than that of the Graces, nor more than that of the Muses’. That is to say, there should be at least three guests to ensure the conversation flows but no more than nine to avoid splitting into smaller groups.

Cohen is conscious that drawing parallels with popular television programmes might be controversial among her peers but she is convinced that the producers of Come Dine With Me believe, as Kant did, that dinner parties are extraordinary experiences.  But Cohen concedes that while reality TV producers probably see them as extraordinary because they can reveal the worst of human nature, Kant believed they can reveal the best in all of us—provided we are content to follow certain conventions.

“They offer the unique opportunity to realise and thus embody the ideal form of humanity – if only for a blissful evening. It is in this sense that they are the ultimate Kantian experience,” she adds.