A lesson in efficiency – ants show the way

The roles of individual ants in a teeming colony can provide valuable insight into the management of large-scale systems, according to research by Dr Elva Robinson, of the York Centre for Complex Systems Analysis.

Analysing the behaviour of ant colonies and the rules that its individual members follow offer important clues into complex systems’ response to environmental challenges.

Dr Robinson, a Lecturer in Ecology in the Department of Biology at York and a member of the York Centre for Complex Systems Analysis (YCCSA), says it is possible to use this information to make large-scale systems more resilient and responsive. She says this is particularly important as modern society’s growth fuels the need for larger, more decentralised systems. 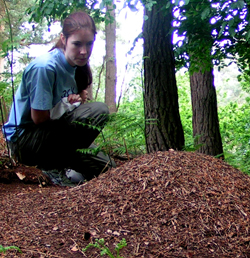 An ant colony appears cohesive yet there is no “management” structure or set rules. Instead, it is a self-organised system whose parts interact locally without central control – the individual works in a set of parameters which creates group behaviour when extended throughout the colony.

Dr Robinson uses Radio-Frequency IDentification (RFID) technology to investigate the allocation of the work-force to different tasks in the colony, and how this is affected by the individuals’ responses. She also uses RFID to study how simple individual decision rules can combine to produce unanimous collective decisions. She is developing a new model system – ant nest networks – to investigate how network structure relates to adaptive function.

Her research reveals that an ant’s role is influenced by its specialism ranging from defence to fat storage. When a change in the external environment affects the colony, the specialists adjust their behaviour. For example, a reduction in food supply results in more ants foraging, despite an apparent lack of specialists.

Usually, only the leanest ants forage, passing food to the rest of the colony. When the colony’s appetite grows, however, the leanest are joined by moderately lean ants in a bigger foraging workforce, until the hunger level is reduced. So the colony’s needs are always met while its most valuable fat-storing ants stay safely inside. 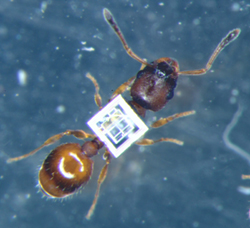 Dr Robinson monitors the ants’ behaviour by attaching tiny radio transmitters to them. These devices trigger a series of automatic doors which only allow access for certain individuals or groups, allowing accurate research into factors affecting groups of individuals, such as fat levels and experience.

The research is currently carried out on small colonies of Temnothorax albipennis (rock ant, pictured), though the next stage is to expand it into larger colonies of Monomorium pharaonis (Pharoah ants). These ants are an incredibly successful pest species whose colonies can number over 2,500 individuals with over 100 queen ants.

Dr Robinson, who is a Royal Society Dorothy Hodgkin Research Fellow, says: “These highly complex colonies show that it is possible to have complex systems governed by a relatively simple set of rules. In an age of increasing decentralisation, the lessons we can learn about managing such multifaceted structures are of significant benefit.

“For example, if this ‘self-organised’ behaviour were applied to a large scale communications network, the improvements in performance, robustness and efficiency could be significant.”

The York Centre for Complex Systems Analysis (YCCSA) is a wide collaboration across science departments (and beyond) at the University of York. Its primary objective is the development of novel mathematical and computational methods and tools for the analysis and modelling of complex systems drawn across engineering, physical, and biological sciences.

YCCSA carries out a wide range of research into complex systems, including novel hardware and software engineering, and modelling of physical and biological complex systems at multiple levels of detail.

YCCSA is based in the new Ron Cooke Hub on the Heslington East campus expansion.