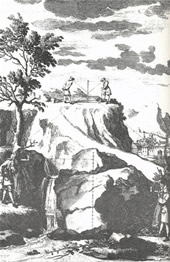 The French formal garden is typically understood to have originated in a series of exemplary works of the early seventeenth-century. The most famous examples include designs by Jacques Lemercier at Richelieu, François Mansart at Maisons, and André Le Nôtre at Vaux-le-Vicomte. In these works, the garden appears as the climax of a new, monumental approach to the house, with both elements subordinated to the same compositional symmetry and linked by a common axis. The new style appears to have originated, above all, in a desire for grand visual effects produced by manipulating the landscape on a previously unknown scale. Yet, historians have paid little attention to the technical advances that such effects presumably required. To what extent was the history of the French formal garden linked to contemporary advances in surveying? Were the architects of these spaces familiar with the practical mathematics that such techniques demanded? How might they have gained such knowledge?

3.45-4.15: Chloe Morgan (York): ‘Pertli in Paradis a Place for to Have’: Mapping Literary Space in late Medieval Romance

This paper considers the ways in which space, and its multivalenced nature, can be articulated through literary texts. It argues that the long-acknowledged difficulty of defining ‘literary space’ does not necessarily invalidate these texts as tools for exploring notions of space and its potential significances. Rather, it legitimises notions of instability and abstraction which can be productively harnessed as a means of negotiating this signifying potential. By looking closely at the multiple spatial narratives expressed within a short passage from the Middle English Romance William of Palerne, this paper will highlight features of ‘literary’ discourse and their potential to inform our readings of other textual discourses which engage with notions of space.

With a background in architectural design, followed by research in architectural history, and then a period teaching public art and writing art criticism, my work has focused on interdisciplinary meeting points – feminist theory and architectural history, conceptual art practice and architectural design, art criticism and autobiographical writing. Recently my writing has explored the position of the author, not only in relation to theoretical ideas, art objects and architectural spaces but also to the site of writing itself. This interest has evolved into a number of ‘site-writings’ that investigate the limits of criticism, that ask what it is possible for a critic to say about an artist, a work, the site of a work and the critic herself and for the writing to still ‘count’ as criticism. This paper outlines some conceptual concerns that frame this project with particular reference to the work of Jessica Benjamin and Jean Laplanche, and discusses two pieces of site-writing, one written in response to the work of Elina Brotherus’ ‘Spring’, the other in relation to Nathan Coley’s ‘Black Tent’. The site-writings combine critical and creative writing modes and this paper tracks their changing forms from essay to text-based installation.