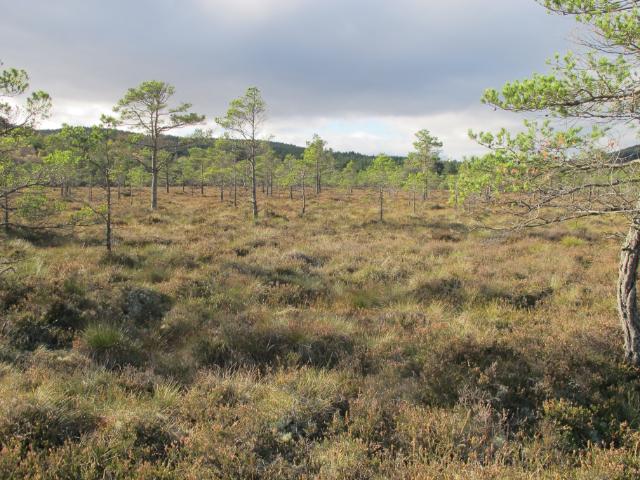 Peatlands are a very important component of the Scottish Landscape, covering over 20% of its land area. Peatlands in good conditions provide a wealth of benefits such as carbon storage, drinking water provision, flood mitigation and biodiversity conservation. Despite this most peatlands in Scotland have been degraded by human activities, resulting in the loss or reduction of many of these benefits. There is presently particular concern about maintaining or restoring peatlands' capacity to take up and store carbon so as to mitigate climate change.

One of the activities which has threatened peatlands is the planting of commercial forestry plantations, especially during the 70s and 80s. The establishment of these plantations results in the desiccation of the peat surface and the destruction of its original ground flora. This has a range of negative effects including facilitating the oxidative decay of upper layers of peat which can release substantial quantities of carbon dioxide.

Although it is now widely accepted practice not to plant on deep peat (>50cm) the question remains what to do with those areas already planted - with many plantations now reaching maturity. Large areas of afforested peatland are in the process of being restored and some argue this should be the fate for all plantations. However given the expense associated with peatland restoration and the ambitious government targets to increase forest cover in Scotland this may be unrealistic - instead it is likely that some plantations will be conventionally restocked with more trees after the original timber crop is harvested.

In 2014 Forestry Commission Scotland proposed a new management option for plantations on deep peat which was termed 'Peatland Edge Woodland'. They argued that in some cases it may be suitable to clear a plantation and then establish a low density woodland, with at least 20% woodland cover being maintained. They theorised that in some situations the creation of such a habitat might allow sufficient recovery to peatland that the area would be restored to a net carbon sink while simultaneously providing a habitat with some of the biodiversity benefits of both peatland and woodland.

The concept of Peatland Edge Woodland is a controversial idea. After several year of it the concept being introduced it remains poorly defined with regard to how it should be created and maintained, what its composition and structure should be, and what benefits it should provide.

Scope of the Project

Scope of the Project

This project has two main components to it. The first is to produce a policy review on Peatland Edge Woodland. This involves critical review of policy documents and scientific literature combined with a series of interviews with key stakeholders in peatland and forestry management (see 'Policy Analysis' tab). The second and larger component of this project is ecological study on the impacts that Peatland Edge Woodland has on peatlands (see 'Field Campaigns' tab).

This part of the project aims to form a better understanding of how the concept of Peatland Edge Woodland has been recieved in the early years after its original proposal. The first stage of this sub-project was a critical review of available literature and the carrying out of 14 qualitative interviews with a range of stakeholders. The data from this work has been analysed and synthesised to produce a quantitative survey (one with fixed answers). The quantitative survey asks more targeted questions and allows quantitative comparison. This work is still on going. The final publication will focus on the four following themes:

There are many studies on the effect of conventional forestry plantations on peatlands, but relatively little work on the effects of lower density woodland on peatland and no specific research on Peatland Edge Woodland. The project consists of approximately 2 years of field work starting in summer 2018 and finishing in summer 2020. The results from the policy analysis have helped to identify representative field sites and identify relevant research questions.

The aims of the field work are to:

Field work carried out in 2018 to early 2019 is all based at Rumster Forest in Caithness. Field work was carried out on a long term experiment set up by the Forestry Commission at Rumster 19 where areas have been planted with Peatland Edge Woodland adjacent to areas which have been conventionally restocked and left open. Monitering these areas allows a comparison between the impact of Peatland Edge Woodland in comparision to conventional restocking and leaving areas open. A range of variables have been monitored including water table depth, peat depth, rate of litter decay, soil surface moisture, Dissolved Organic Carbon (DOC), water nutrient content, pH, vegetation composition, tree biomass and rate of regeneration.

From spring 2019 field work will focus on Flanders Moss, a lowland raised bog in the Carse of Stirling. The moss includes an area previously used for forestry. Once cleared in the 1990s most areas have been kept clear of tree regeneration but in one area native birch regeneration has been allowed. This area will be compared with surrounding areas that have been kept open. Similar variables will be measured as at Rumster but carbon dioxide and methane flux measurements will also be taken from the peat surface, tree trunks and tree branches. Tree ring analysis and assessment of faunal diversity may also be carried out depending on how the work develops.

In late 2019 or 2020 Skyline 2D (an automated gas flux measuring system) will be deployed at a yet to be determined site to take gas flux measurements along a transect of different tree densities.

The Team and Project Funding

The Project is led by a NERC CASE-funded PhD student at the University of York. The project's CASE partner is Forest Research.

William is the project's PhD student. They completed an undergraduate degree in Biological Science from the University of Oxford and an MSc in Plant Biodiversity and Taxonomy from the University of Edinburgh. William's MSc project looked at the extent of hybridisation of Malus sylvestris (the crab apple) with Malus domestica (the domesticated apple) in Scotland and northern England.

Sylvia is a secondary supervisor to the project and a lecturer at the University of York. Sylvia is a systems ecologist with research interests that include fluxes in ecosystems.

Russell is the CASE supervisor to the project and has been a researcher for Forest Research (the research division of the Forestry Commission) since 1978. Russell is currently the project leader for 'Afforested Peatland Restoration and Ecosystem Services'.

Dr Roxane Andersen (University of the Highlands and Islands)

Roxane is a secondary supervisor to the project and a Senior Research Fellow for the University of the Highlands and Islands's Environment Research Institute. Roxane's research interests are focused on the ecology of peatlands and their restoration.