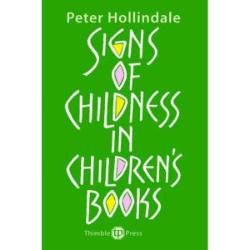 Any Signs of Childness? A CRESJ/Department of Education symposium report

20 years ago exactly, Peter Hollindale, who worked at the University of York in the Department of Education and the English Department, wrote Signs of Childness in Children’s Books.

This little book would become, over the years, one of the most-commonly found on reading lists for children’s literature courses, alongside its older sibling, Hollindale’s Ideology and the Children’s Book. Personally, I discovered it as an MA student at the University of Cambridge – it’s one of those foundational texts everyone has to read in order to better understand the discipline of Children’s Literature criticism and theory.

Hollindale’s text is based on the identification and coinage of a particular thing, ‘childness’, which does not quite coincide with either the bio-sociological construct of childhood (dear to childhood studies and the sociology of education) nor the generally derogatory concept of ‘childishness’, which we sometimes use to describe the attitude of tantrum-prone toddlers or some Presidents.

Instead, ‘childness’, Hollindale posited, is "the distinguishing property of a text in children’s literature, setting it apart from other literature as a genre, and it is also the property that the child brings to the reading of a text". Namely, it is a particular awareness of what it means to be a child in a particular place and time, and a ‘childly’ person, like a ‘childly’ text, reflects that awareness in especially sensitive ways.

The concept, as anyone can see, is quite a floating one, and I have always been equally attracted and awed by it. Often mentioned in children’s literature criticism, it has hardly ever been discussed in any depth, because it is difficult to manipulate, so prone is it to either dissolve into a mist of wishy-washy definitions, or to solidify into a kind of biological essentialism distasteful to many childhood studies scholars.

Still, it’s a compelling text, and a concept that’s a bit like the unexpected item in the bagging area of children’s literature studies: something either too light or too heavy to be recognised by the machine; something you picked up, and do need, but which can’t be processed properly for some reason, so you’re kind of condemned to hold it in mid-air until someone with the right credentials comes to tell you what to do with it so it doesn’t mess up your (theoretical) scales.

Anyway, when I arrived at York last year, it struck me that I was walking alongside the very same sheltered alleyways that Peter Hollindale had done in his time, and that the kiwi-sized ducklings whose pictures I was frantically filling up my phone’s memory with were probably the great-great-…-grandchildren of those that had clucked outside of Hollindale’s window while he was writing Signs of Childness. That made me a bit sentimental, and I realised that what humanity needed right now was a big Hollindale symposium.

Turned out many people were ready to support the idea, including my lovely colleagues Sarah Olive and Amanda Naylor, who are English in Education lecturers in the department. We also got support from the Centre for Research in Education and Social Justice (CRESJ) and from the Department of Education’s general research fund, and we set up a one-day symposium which took place on May 5th in Heslington Hall.

Debbie Pullinger, University of Cambridge  “The words of poems are who you were”: Signs of childness in children’s poetry

Lisa Sainsbury, University of Roehampton Childhood and the possibility of pessimism

Phil Gaydon, University of Warwick  The adultness of Hollindale’s Signs of Childness in Children’s Books

Liam Maloy, University of Liverpool  Childness beyond children’s books: The childness of records made for children

Peter Hollindale on Signs of Childness in Children’s Books  Closing keynote: Maria Nikolajeva, University of Cambridge  What is it like to be a child? Childness in the age of neuroscience

Brilliant participants but also brilliant attendees (an audience someone described as ‘as if my whole PhD bibliography had walked into this room at the same time’). The day was really pretty exceptional for the quality of the papers and of the discussions. It’s not often in children’s literature that we get the opportunity to talk in depth about one text of theory of criticism – most of the time, we go to thematic conferences, or to conferences about one primary text of children’s literature.

And in the middle, we made our childly way to the anniversary cakes, which are quite indispensable in children’s literature conferences.

So happy anniversary to Signs of Childness in Children’s Books, and thank you to CRESJ, the Department, the participants and the attendees. Some of the papers we’re hoping to publish in some form in the future – we’ll keep you updated.

If you’re interested to know more or want to get in touch with the children’s-literature-obsessed people at York, email clementine.beauvais@york.ac.uk