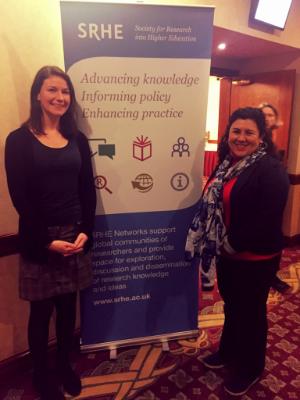 CRESJ was represented at the Society for Research into Higher Education's Annual Conference 2015 by PhD students María Ana Chavana Villalobos and Jenn Chubb. They gave presentations on their doctoral research as part of the Early Career Researchers day at the conference, which was held at the Celtic Manor resort, Newport, South Wales, 8-11 December 2015.

María Ana's presentation was entitled Staying or leaving the course in public higher education in Mexico. In it, she discussed findings from her project looking at student non-completion on a highly selective elite economics degree in a public university in Mexico. The study highlights influential factors cited by students who remain on the course and those who leave.

Jenn's presentation, Research with impact: Academic perspectives from the UK and Australia, drew on her research interviews with university researchers in the UK and Australia and their reaction to the 'research impact' agenda. The study finds that the emphasis governments and funders in both countries are placing on the practical social and economic impact of research is having consequences politically, practically and philosophically for the practice of research and researchers.