CRESJ lecturer Dr Sarah Olive's research looks at how William Shakespeare's works are used within education in the UK and across the world. 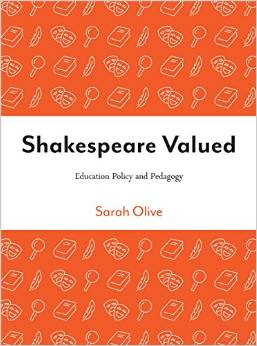 CRESJ member Sarah Olive has a keen interest in access to Shakespeare for and beyond students in formal education, in terms of popular culture representations, education policy and English subject pedagogy. In May, she will participate in the Rethinking Disability on Screen conference, hosted by York's Humanities Research Centre, delivering a paper on the learning identities of Shakespearean actors with Downs' Syndrome in the documentary Growing up Downs. This represents an extension of her existing work on representations of school students' learning identities around Shakespeare in reality television (to be presented at the Shakespeare Association of America meeting in Vancouver this Easter, with an article forthcoming in the leading international journal Shakespeare in 2016), with an existing publication on how these play out in Jamie's Dream School. It also builds on her work editing the British Shakespeare Association's magazine for educators across sectors, Teaching Shakespeare, especially issue 5 which looked at barriers to access: physical, monetary, and temporal.

Her forthcoming monograph, Shakespeare Valued, deals with the question of how governments from 1989 to the present have succeeded (or failed) in ensuring Shakespeare for all through their education policies. She continues to raise discussion around pedagogies and resources which claim to make Shakespeare more accessible in her frequent blog posts for the British Shakespeare Association's Education Network (which she chairs) and Reviewing Shakespeare websites. She has contributed to current conversations on Global or Glocal Shakespeares, exploring experiences of Shakespeare in education in Japan, New Zealand, Norway, and, from 2015 onwards, in South Korea and the Subcontinent thanks to funding from the British Council, GB Sasakawa Foundation, York-Waikato exchange and World Universities Network.

Sarah's doctoral students include those working on Shakespeare for Human Rights Education and criminal rehabilitation. She is always eager to hear from PhD applicants interested in researching in similar areas as well as students, practitioners and educators internationally who would like to contribute to Teaching Shakespeare and/or the British Shakespeare Association's Education Network blog. She hosts events for researchers and practitioners on artivism (activism using the arts to acheive social justice) and would be happy to collaborate on more of these.