The Campus East site consists of 116 ha, of which 65 ha are for development, with the remaining 51 ha being landscaped.

The first phase of the landscaping on the western and southern edges of the Campus East site involved the creation of mounds known as ‘bunds’ using excavated material from the first phase of the lake development, and other top soil mounds from the archaeological works. This buffer zone extends for 300-400 metres between Heslington Village and the buildings on Campus East.  Further excavated spoil was used to increase the height of Kimberlow Hill and build up the bunds alongside the A64.

Around 45,000 trees and shrubs have so far been planted on Campus East. The trees are predominantly native species and most have been grown in the Vale of York. Some of the trees are being used to reinforce the hedgerow boundaries.  Much of the rest of the site has been planted with grass and wild flower mixes.

In 2012, the University was awarded the honour of being able to plant a Diamond Wood on Kimberlow Hill, one of only 60 in the country, in celebration of the Queen's 60th anniversary.

Nearer to the buildings the landscape becomes more formal with specimen trees, shrubs and bulbs.

The first phase of the lake and the wetlands was completed in September 2009, and the second and larger phase was completed in August 2010.  A small ‘opening’ ceremony was held on 6 September to commemorate the start of the filling of the lake, which will take up to a year to come up to its required level.

Why is the lake needed?

The lake fulfils two functions:  as well as providing a beautiful amenity, a wonderful visual feature and a habitat for wildlife, the lake is needed as a balancing lake for the surface water on the site.  For the site to work successfully without causing flooding problems downstream, water can be discharged at no more than 1.4 litres per second per hectare into existing watercourses.  Together the buildings, roads and landscape generate a large volume of water in runoff.  The amount varies significantly depending on the weather and rainfall.

The lake has been designed to support both current and future developments on the site and also to take the surface water flows from Badger Hill, which discharge onto Campus East. The total catchment is 150 hectares or 1.5 million square metres.  The lake controls discharge to some 200 litres per second, which is run to two existing watercourses – Tilmire Drain and Germany Beck. In its balancing function it maintains the flow up to a 1 in 100 year event as the water level rises by up to 70mm.  It has enough storage capacity for a 1 in 1000 year event, when the level of the lake would rise by c190mm.  Essentially, the whole development depends on it.

The lake was excavated by the contractors J N Bentley.  They started at the west end and wetlands in August 2008, finished those in Spring 2009, and after a short break returned for the second phase in June 2009.

In such a large expanse of ground, formed from a glacial moraine, there were significant variations in ground conditions, including clay and running sand, which created an engineering and construction challenge.  J N Bentley came across numerous pockets of clay-locked saturated sand.  All of this had to be removed to construct the water-tight structure.

The construction is approximately 1 metre thickness of engineered clay, covered over with a man-made liner, with the whole surface then protected with a further cover of sand.  All this should ensure that it does not leak.

A key feature of the lake in operation is the recirculating system.  This allows the lake water to be pumped to the eastern and western extremities, promoting flow, preventing stagnation and allowing cleaning of water to prevent algal bloom.  The system draws water from the main lake outlet and then pumps it to a fully automatic system running 24 hours a day every day of the year.  The recirculating rates are 40 litres per second to the western end and 20 litres per second to the east.  The lake relies on a regular supply of rainwater to be full, but in case of prolonged drought a top-up system has been incorporated, which brings water up from the aquifer some 30 metres below via a borehole.  The University has a licence to abstract up to 7 litres per second while the lake fills up initially, and to top up during the summer months if required to maintain levels.

At around 10 hectares the lake is a remarkable feature of the landscape, and is no less significant, though possibly with less immediate impact, than the striking architecture of the new buildings.  It is already supporting new wildlife and improving biodiversity, and this will continue to develop as the landscape matures, providing an ever-changing and fascinating backdrop to the University on Campus East. 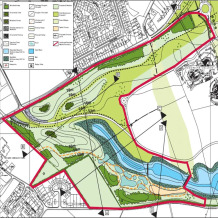