A new archive detailing Frankie Howerd’s career containing previously unseen scripts, correspondence and memorabilia has been acquired by the University of York. 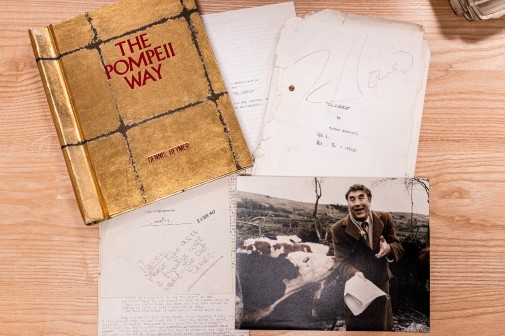 The archive -  acquired by the Borthwick Institute for Archives -  reveals new insights into his showbusiness career that spanned six decades.

At the heart of the collection are some 30 boxes of scripts, contracts and agency correspondence, detailing the the whole of Howerd’s career on stage, sound and screen. One unusual item is a battered navy suitcase, hand painted with his name; which on opening revealed a selection of annotated scripts and ideas which archivists think was selected by the man himself.

Gary Brannan, Keeper of Archives and Special Collections, said: “When we came to open the suitcase, it became clear that the items in there had been selected and not just thrown in randomly. It looked like it had been very carefully selected from various points across the whole of his career,  so we think it might have been curated by him.

“We are now in this incredibly privileged position of working through the entire archive to piece together more about this incredible man who had such a long and successful career.

The performer – known for his comic timing, double-entendres and storytelling – has personally annotated many of the scripts bringing them to life, underlining words for emphasis or adding comments and changes to the written text.

The archive includes the script for an unseen US adaptation of ‘Up Pompeii’ called ‘The Pompeii Way’; Howerd’s own copy of ‘Carry on Up the Jungle’ featuring many unrecorded scenes; plus thousands of contracts detailing all the ups and downs of Howerd’s career, including his seminal appearance at Peter Cook’s ‘Establishment’ club which relaunched Howerd’s career and changed the face of stand-up comedy.

The collection also reveals how he was paid £600 (c. £21,000 in 2021) to appear in the Beatles’ film Help! as the character, Sam Ahab - but that his performance was cut from the finished film.  The archives also reveal the shows he declined including a script he rejected for Cameron Mackintosh’s, Oliver.

The archive - previously inaccessible to researchers - will be catalogued and made available for comedy fans to enjoy.

Gary Brannan added: “It’s a huge privilege to bring Frankie’s archive to York for everyone in the city to use and enjoy. The archive is a huge new source for research into comedy and what makes us laugh.”

Frankie Howerd was born in 1917 in York, and spent the first few years of his life in Hartoft St, Fulford. His family came to York as his father was a soldier and was serving in the army in the city, his mother working at the Rowntree's factory.

The comedian is buried in Somerset where he had lived for the last 20 years of his life with his partner.

The archive is open to the public for research and more details about the collection can be found here  https://frankie-howerd.york.ac.uk