Professor Lucy Carpenter has been awarded an MBE for services to Atmospheric Chemistry in the New Year’s Honours list. 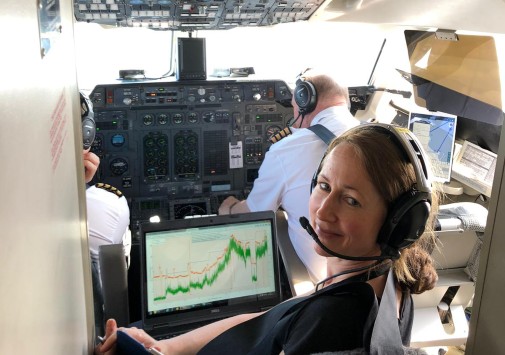 Lucy Carpenter is Professor of Atmospheric Chemistry in the Department of Chemistry at the University of York. Her research investigates the complex interaction between the oceans and the atmosphere and she has demonstrated critical links between ocean processes and atmospheric chemistry.

Highlights from Professor Carpenter’s research career so far include her discovery that ozone in the troposphere – a dangerous air pollutant and greenhouse gas – is destroyed over wide oceanic areas by natural hydrogen emissions. This finding led to public and policy debate on the potential of natural processes to mitigate against air pollution.

Professor Carpenter is also the co-founder of a major atmospheric observatory at a remote location on the Cape Verde islands in the Atlantic, where she leads a long-term atmospheric monitoring programme.The measurements taken at this international facility have contributed to the understanding of global emissions and trends of volatile organic compounds.

Professor Carpenter said: “I’m delighted and honoured to receive an MBE for services to atmospheric chemistry and thankful to my colleagues for the recognition.

“I want to thank my amazing team and colleagues at York for being so great to work with and my family for always having their support.”

Professor Caroline Dessent, Head of the Department of Chemistry at the University of York, said: “I was absolutely delighted to see Lucy's work recognised by the award of an MBE.  Lucy is an outstanding scientist who has made extensive contributions to our understanding of the atmospheric chemistry of reactive halogen compounds, and the complex links between the ocean and atmospheric chemistry.

“Lucy's scientific achievements should also be seen against the exceptional service that she has given to the field of atmospheric science and her work as a very active STEM ambassador, particularly encouraging young women to pursue careers in science through the outreach work she's conducted with secondary schools. All of this work has been conducted without fanfare or self publicity, which is why it is so pleasing to see Lucy awarded her MBE.”

She was a Lead Chapter Author of the 2014 and 2018 World Meteorological Organization (WMO) and United Nations Environment Programme (UNEP) Scientific Assessments of Ozone Depletion and is Chair of the WMO Global Atmosphere Watch (GAW) Scientific Advisory Group on Reactive Gases.