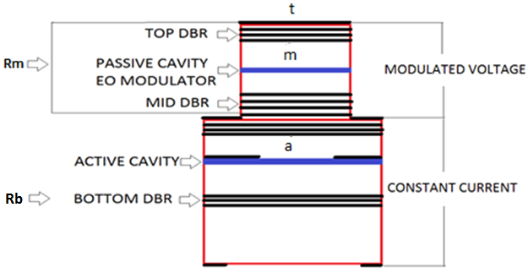 Schematic of a Compound Cavity Laser

There are two main methods of modulating vertical cavity semiconductor emitting lasers (VCSELs) at bit rates exceeding 40 GBit/s which can be used for high speed communication networks. The first one is through advanced developments in current (direct) modulation, which was demonstrated at bit rates up to 40 GBit/s. The modulation of the photon lifetime in a passive cavity is an alternative to current modulation. This approach promises substantially better dynamic properties than current modulation since it is free from the limitations of direct modulation such as the the electron-photon resonance. The main laser design that allows this principle to be utilized is the coupled-cavity VCSEL with one of the subcavities acting as an active one, and the other, as an electrooptic modulator. Modulation bit rates at least as good as those possible with direct modulation have been demonstrated in the literature and rate equation analysis predicts successful operation at bit rates exceeding 80 GBit/s. However, rather than offering simple modulation of the photon lifetime, our design involves the laser oscillating in complex cavity modes, with the cavity decay time (photon lifetime), instantaneous frequency, and intensity all varying in time in a self-consistent way, which is not captured by rate equations.

Thus, in order to understand the laser performance more accurately, we have implemented a model that includes careful analysis of both amplitude and frequency (phase) of laser emission, as well as the spectrally selective nature of the laser cavity. The model comprises a set of modified rate equations for the complex amplitude of light and carrier densities; the equation for the light involves analysis of complex eigenvalues (frequency detunings and amplitude variation rates) of the compound cavity modes. The modified rate equations, like the standard one, can be, and are, used to describe the laser operation and predict the performance beyond current experimental conditions, under both small- and large signal modulation conditions. 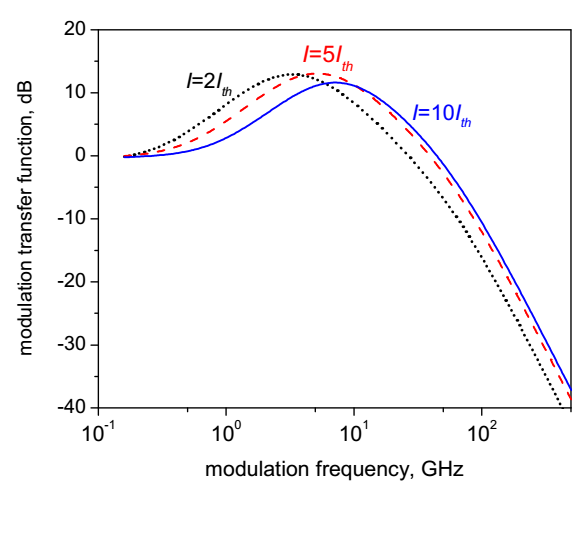 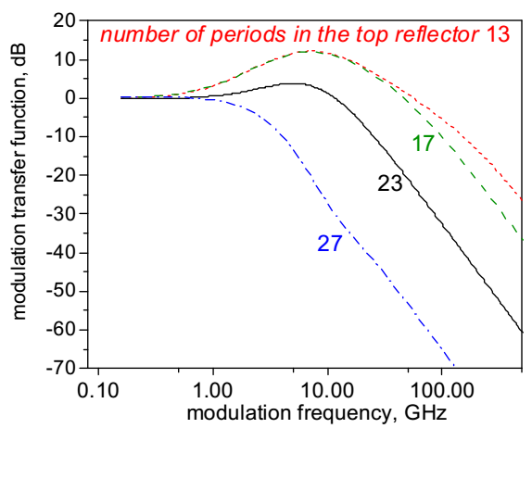 The main conclusion from the (analytical) small signal modulation analysis is that the ultimate modulation frequency limit is determined by the photon lifetime of the modulator cavity and with proper design can be in the range of hundreds of GHz. Numerical large-signal simulations have shown that the quality of modulation depends nonmonotonically on the numbers of dielectric grating periods in the top and intermediate mirrors, with an optimal design applicable in a broad range of currents. Good quality factors at 80+ Gbit/s modulation frequency were predicted with optimal cavity design. 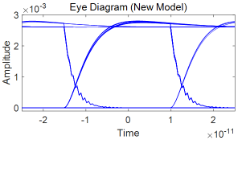