[Back to Anne Lister's story] 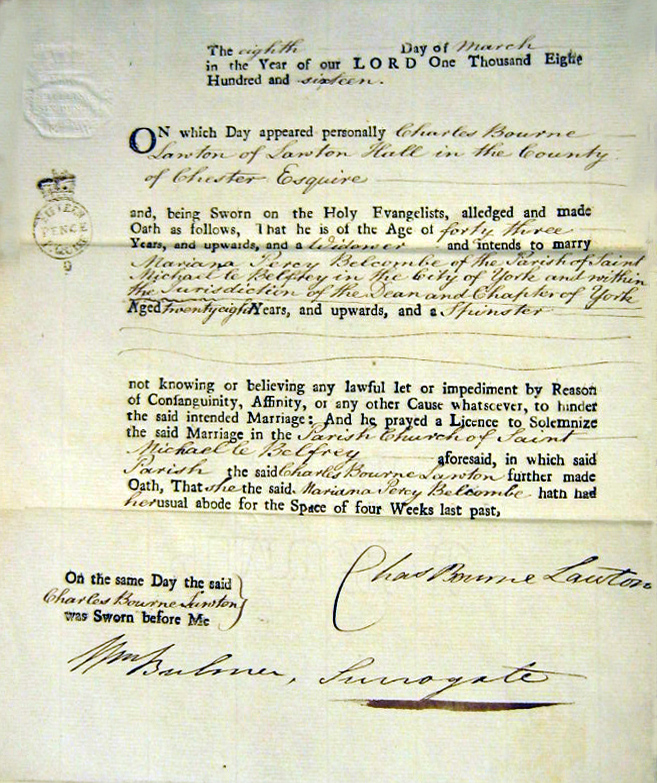 Those words which are printed on the original form are in bold:

On which Day appeared personally Charles Bourne Lawton of Lawton Hall in the County of Chester Esquire and, being Sworn on the Holy Evangelists, alledged and made Oath as follows, That he is of the Age of forty three Years, and upwards, and a Widower and intends to marry Mariana Percy Belcombe of the Parish of Saint Michael le Belfrey in the City of York and within the Jurisdiction of the Dean and Chapter of York Aged twenty eight Years, and upwards, and a Spinster not knowing or believing any lawful let or impediment by Reason of Consanguinity, Affinity, or any other Cause whatsoever, to hinder the said intended Marriage: And he prayed a Licence to Solemnize the said Marriage in the Parish Church of Saint Michael le Belfrey aforesaid, in which said Parish the said Charles Bourne Lawton further made Oath, That she the said Mariana Percy Belcombe hath had her usual abode for the Space of four Weeks last past,