Experts in the Department of Archaeology are working with stonemasons at York Minster in a major restoration project on the building’s east front where ornate carvings and stone figures have been worn smooth by weather and pollution.

Some of York Minster's new stone grotesques, inspired by the building and the product of the creative genius of the Minster carvers (Image credit: John Houlihan)

Blasted by centuries of wind and rain, eroded by atmospheric pollution and damaged by several major fires: no wonder the magnificent stonework on York Minster is in need of some serious TLC.

As part of the York Minster Revealed Project, a team of expert stonemasons and carvers is currently hard at work recreating and replacing over 3,500 strucutural and decorative stones which have become weathered and worn in the face of prolonged exposure to North Yorkshire’s challenging environment.

Dr Kate Giles, senior lecturer in the University of York’s Department of Archaeology and, for the last 13 years, Archaeology Research Fellow at York Minster, is a key figure in the project. As one of the country’s leading buildings archaeologists and Director of the MA in the Archaeology of Buildings, her advisory role ensures the conservation and repair work is informed by the results of collaborative research.

The history of the Minster is literally written in stone

Where features and details have been eroded, Kate can draw on evidence from archaeological investigations, backed by a deep understanding of the fabric, to help shape debates around what form any replacement stonework should take.

The Minster’s expert stonemasons in action 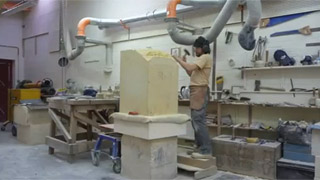 Kate said: “The history of the Minster is literally written in stone. We know that the first major restoration work started in the 18th century and since then, you can trace evidence of the work carried out over the centuries.

“Archaeology and history have not always been an integral part of the restoration process. In the past there was a perception that archaeological investigation might delay or even prevent restoration. However, more recently the important role of archaeology in informing conservation work has been accepted. Archaeology has a crucial role to play in balancing the desire to preserve the past with an understanding that buildings have always changed and developed over time.” 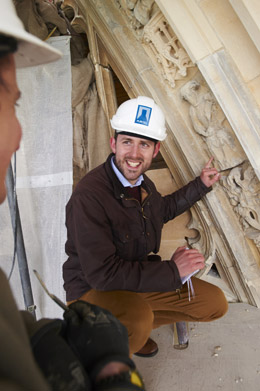 Dr Alex Holton, former York student who studied the archaeology of the Minster's east front for his PhD thesis

The York Minster Revealed project is focusing on the building’s east front, where stonemasons and carvers are working in partnership with glaziers to restore the magnificent Great East Window, one of the greatest pre-Renaissance treasures of European art. The stained glass is the focal point of the structure. But the intricate stone carvings, around the window and on the buttresses surrounding it, are equally impressive, providing a decorative structural framework for the largest expanse of medieval stained glass in Britain.

In some cases the erosion of the magnesian limestone is so bad that features are worn smooth and almost unrecognisable. Conservation and replacement requires historical and archaeological detective work to ensure the 21st century renovations are sympathetic to the original intentions of the building’s gifted creators.

‌Documentary evidence preserved in the Minster’s archives informs that work, including vellum rolls dating from the 14th century, accounts by chroniclers, antiquarians’ notes and drawings and more recent architectural records.

The research also took Kate and her team into the Masons’ Loft, on the first floor of the L-shaped Chapter House, where from the 14th century onwards, stonemasons created scale drawings of tracery designs scratched into the surface of a lime ash floor.

The Archaeology and Conservation of the East Front of York Minster was the result of four years of research, much of it spent on the scaffold platforms, up close and personal with one of the most iconic expanses of stonework in Europe. The thesis uncovered unexpected secrets about the building’s complex construction and repair history and it provided valuable practical experience when, as part of his studies, Alex was seconded to work in the Minster Stoneyard as a conservator. It also proved the passport to a heritage consultant post with award-winning architects Purcell.

Alex said: “My time at the Minster wasn’t only about academic research. I worked closely with the stoneyard, developing a strong positive dialogue between the University and the craftsmen. We learned from each other.”

Kate said: “It’s one of my favourite places in the Minster because it tells the story of the masons, how they made their drawings and how they transferred them into the stonework we see today. As well as the remains of lines and drawings in the floor, there’s the outline of a fairly chunky pair of feet and dog paw prints.”

The international impact of the work was highlighted in April this year in a series of lectures by Kate Giles and colleague Sarah Brown to audiences in New York University, Columbia University, Rochester University and in a public and alumni event hosted by Christie’s, New York. Kate has used her role in the University to give numerous students the opportunity to get involved in the conservation work, including Dr Alex Holton, who spent four years, including a secondment to the stoneyard, studying the archaeology of the east front (see panel). She has worked closely with John David, Master Mason of York Minster and Andrew Arrol, Surveyor to the Fabric to ensure the archaeological significance of stonework is considered before decisions are made to conserve or replace it.

One of the most complex debates has centred on the decision to replace the weather-worn carved figure seated over the apex of the Great East Window, one hand raised in blessing and another holding what appears to be a model of the cathedral itself.

“We were thrilled to welcome some of the UK’s most eminent architectural historians, including our own experts Sarah Brown and Christopher Norton from the Department of History of Art, to a symposium to debate who this figure was and how he should be replaced”, said Kate. “We’re now pretty confident that he was St Peter, the patron of the Minster. After laser scanning, archaeological recording and casting, an exciting model of what the new St Peter will look like has been created by Martin Coward, a carver at the Stoneyard.” 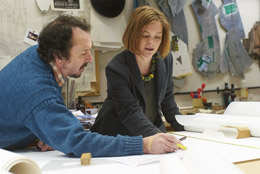 Dr Kate Giles with John David, Master Mason at York Minster Other new carvings, such as the grotesques which sit hundreds of feet up on the south-east buttress, are the product of understanding the building and the creative genius of the carvers.

One of Kate’s major roles in the York Minster Revealed project has been to engage apprentice masons with the idea of looking at the archaeology and the history of the Minster as a source of inspiration for their own work. She says one of the University of York’s unique advantages has been its ability to offer successive generations of craftsmen and students training on a building of international significance.

“Archaeology is not just about telling the stories of the past. It is also about informing the decisions we take today. At some point in the future, scholars will pour over details of our archaeological and conservation work, and make other kinds of observations, discoveries and decisions.  We are just the latest in a long line of people contributing to the story of the Minster and its place at the centre of human life in the city,” said Kate.