Science teaching in schools is being transformed with the help of the University of York Science Education Group (UYSEG) which chalked up its 30th anniversary in 2013. So what’s their formula for success?

More teenagers are opting to study science at school with the number of A-level science and maths candidates increasing by around three per cent last year. Some attribute the upsurge to the economic downturn as pupils select subjects they think will give them a better chance of a job. Brian Cox, pop star turned TV physicist, might also claim some of the glory.

UYSEG was founded by Professor David Waddington who was succeeded by Professor John Holman, both eminent figures in science education who contributed greatly to the success of the group.

But behind the scenes, a group of science education specialists at the University of York has been working on innovative curriculum reforms that go at least some way to explain the increasing numbers of pupils giving serious consideration to science as a career.

The University of York Science Education Group (UYSEG), which celebrates its 30th anniversary this year, has revitalised courses in chemistry, physics and biology encouraging more school pupils to study and enjoy science. One suite of courses, Twenty First Century Science GCSE, first offered to schools in 2006, helped boost the numbers of students going on to study physics, chemistry and biology at AS-level by up to 37 per cent.

“We are aiming to develop context-based courses that are relevant to everyday situations pupils can relate to,” explained Robin Millar, Salters’ Professor of Science Education at York and one of UK’s leading education experts. “We want pupils to be able to apply their science learning outside the classroom and to be stimulated to study science further.

“A wide range of factors influences a pupil’s subject choice. The thing which draws pupils into science is discovering that it is interesting. With younger learners we need to start from their natural curiosity about the world, help them raise questions about it and then gradually introduce them to the fascinating and often surprising answers that science provides.”

Central to the group’s success is its involvement in both research and development. Members of the group are involved in studies looking at the teaching and learning of science and draw on findings and insights from leading edge research to design and develop new teaching methods and materials. 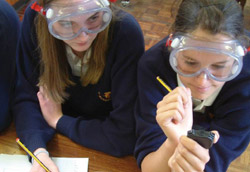 More school pupils are discovering the wonders of science The aim is to link science to everyday, contemporary issues. New courses have shifted the focus from obscure equations and formulae to issues such as the science of climate change and the chemical properties of synthetic fabrics in high street clothes. Courses developed by UYSEG encourage questioning and exploration rather than passive acquisition of knowledge with little relation to life beyond the classroom.

Chemistry was the first subject tackled by UYSEG back in the early 1980s when the group developed a one-year chemistry course for Year 9 pupils in a bid to stem the flow of youngsters abandoning the subject before certificate stage.

The fledgling course was developed with the help of school teachers from around the country who joined forces with University-based chemistry educators to plan the new programme. The work was supported by the Salters’ Institute, an educational charity formed in 1918 to support the training of young chemists. It was the start of a long and successful partnership with the Institute which continues to be a major supporter of curriculum development work at York.

“Pupils enjoyed the new approach of this Year 9 chemistry course and had a better understanding of the relevance of what they were being taught. This also made it more enjoyable to teach,” said Professor Millar.  “But having encouraged that new approach, teachers were then reluctant to return to the old methods at the end of the course, so we went on to develop GCSE and A-level courses in a range of science subjects.”

The chain reaction started by that first chemistry course led to Salters’ GCSE Chemistry, Salters’ GCSE Science and Salters’ Advanced Chemistry for A-level students, followed by Salters Horners Advanced Physics and Salters-Nuffield Advanced Biology. This sequence of major curriculum developments, alongside other smaller-scale projects, confirmed the group’s growing international reputation for leading edge research-based reforms that caught the imagination of both pupils and teachers. Courses developed by the group also have international appeal and have been adapted for use in the USA, Sweden, Germany and Spain. 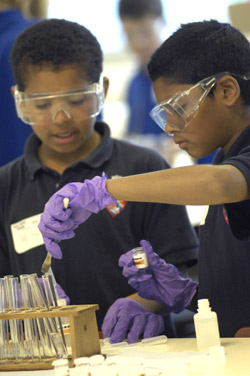 School pupils at the Salters' Festival of Chemistry UYSEG’s flagship Twenty First Century Science GCSE, supported by the Nuffield Foundation, the Wellcome Trust and the Salters’ Institute, still remains one of its most successful products.

Just two years after its introduction, the course was being used in 23 per cent of maintained schools in England, with over 120,000 candidates completing GCSE science qualifications every year. More than half of schools offering Twenty First Century Science said they had seen increases in pupil numbers in all three sciences at AS level.

“Twenty First Century Science has moved the discussion of school science forward significantly in the UK – it has demonstrated it is possible to stretch and challenge those with an aptitude for the subject, whilst at the same time raising the level of scientific literacy for all,” said Professor Millar.

Professor Millar’s contribution to the development of new science teaching approaches and curricula was acknowledged in 2010 when he was one of three University of York scientists named in the 100 ‘most important contemporary figures in British science,’ in Eureka, the monthly science magazine published by The Times. In 2012, Professor Millar served as President of the Association of Science Education (ASE) taking over from genetics professor Steve Jones.

University archaeologists go back in time to shape York Minster