In early 2001, during the darkest days of the Foot and Mouth epidemic, Professor Dianna Bowles, former Director of the Centre for Novel Agricultural Products at the University of York and part-time sheep farmer, received an unexpected phone call from a farmer in Cumbria.

Andrew Nicholson, a leading breeder of Lakeland’s iconic Herdwick sheep, was on the line. He told Professor Bowles he feared the cull underway to control the spread of the disease was in danger of wiping out the Herdwick breed, a familiar sight on the Cumbrian Fells for over 1,000 years.

Cumbria was one of the worst affected regions during the Foot and Mouth outbreak. In the early days, thousands of sheep were slaughtered in the county every week in a mass cull that went on to claim over ten million farm animals nationally.

Professor Bowles said, “Andrew Nicholson could see the potential for the Herdwick sheep breed to be lost, or at best, some of the best bloodlines to be lost. He simply said to me ‘You’re a scientist. You must be able to do something’.”

“I explained to him that I was a plant scientist and although I kept a few Herdwick sheep, I knew nothing about the science of sheep, but he insisted. So I put the phone down and thought about it.”

Another prominent Cumbrian Herdwick breeder, at that time in his late 70s, also spoke to Professor Bowles.  “He bred some of the most prized Herdwicks in the country - and he was crying on the phone.”

Getting the funding and agreement to set up the gene bank was one issue, but the extensive movement restrictions meant the logistics of getting onto the farms were considerable

Galvanised by the farmers’ plight, and her love of the hardy Herdwicks, Professor Bowles began to make some calls of her own. She used her extensive contacts book to secure professional expertise and crucially, over £50,000 of funding from charitable foundations and government. A couple of weeks later, the Heritage GeneBank was born. With the help of a Cumbrian vet, and a commercial livestock breeding company, the GeneBank collected and froze embryos and semen from Herdwicks and other native breeds across the Lakes to ensure their survival in the face of the ongoing slaughter.

“Getting the funding and agreement to set up the gene bank was one issue, but the extensive movement restrictions meant the logistics of getting onto the farms were considerable – it required a lot of trust and organisation,” explained Professor Bowles.

In the end, the gene bank managed to co-ordinate collections from around 30 farms across Cumbria. The collections included semen from valuable Herdwick rams owned by the farmer who made that first call to Professor Bowles - prized livestock which later in the epidemic, fell victim to the cull. Genetic material from other breeds including Rough Fells, Yorkshire’s native Dalesbred sheep was also stored.

The success of the project was celebrated ten years later when some of the Herdwick embryos were lifted from their liquid nitrogen storage containers in specialist laboratories in Edinburgh and implanted successfully into surrogate ewes. The resulting lambs, born a decade after one of the worst farming crises to hit the UK, were returned to their original breeders in Cumbria.

One of those lambs – now a healthy two-year-old ewe – is currently back in the temporary care of Professor Bowles who keeps a flock of almost a 100 Herdwicks on her farm in Upper Nidderdale. 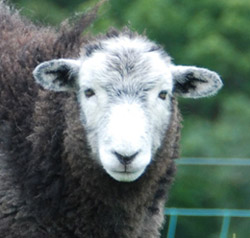 Cinderella the sheep is just one very tangible result of the Heritage GeneBank’s work during foot and mouth. As an embryo collected during the Foot and Mouth outbreak she was stored in liquid nitrogen before being successfully implanted into a surrogate ewe ten years later “I’ve called her Cinderella because she was such a pretty lamb who stood out amongst her less attractive sisters,” said Professor Bowles. “Cinderella has given birth to twin lambs bred from a Cumbrian ram, so the genetic heritage we were trying to preserve with the help of the gene bank is bearing fruit.”

‌The Heritage GeneBank is now managed by The Sheep Trust, an organisation founded and chaired by Professor Bowles with the aim of using science to champion the cause of native sheep breeds throughout the UK. Herdwick sheep are considered to be the hardiest of all Britain’s breeds of hill sheep producing strongly flavoured lamb and mutton and distinctive grey wool often used for carpets and rugs.

“The Sheep Trust has demonstrated that there are about a dozen native breeds concentrated in specific areas of the UK and this can make them vulnerable, particularly to the risk of infectious diseases. Herdwicks are not rare, but 95 per cent of them are farmed within 15 miles of Coniston – a disease like Foot and Mouth or some of the 'new' viruses such as Bluetongue and Schmallenberg, all have the potential to do serious damage to these heritage breeds concentrated in local areas,” said Professor Bowles.

Thanks to the Sheep Trust, the Government’s Department for Environment Food and Rural Affairs (Defra) has recommended that geographical concentration justifies inclusion on the Breeds at Risk Register which offers improved legal protection in the advent of another disease outbreak.

As well as the celebrated Herdwicks, the Sheep Trust is working to conserve some of the less well-known but commercially important breeds such as the South Wales Mountain Sheep and the South Country Cheviots.

Professor Bowles, now an Emeritus Professor in the Department of Biology, is devoting more time to her own expanding Herdwick flock as she scales back her University commitments.

The Foot and Mouth outbreak was grim. For a time farmers lost hope, but time heals and the Heritage GeneBank and the Sheep Trust continue as a reminder of how science can help farming and protect some of our most distinctive native animal breeds

“I was working as Director of the Centre for Novel Agricultural Products and was Chair of Biochemistry when Foot and Mouth broke out. Setting up the gene bank was a major commitment which became a full time job for six months and I have always been grateful to the University for supporting me and allowing the time out.”

As a thank you for her efforts Professor Bowles was appointed President of the Herdwick Sheep Breeders’ Association in 2003, an honour with special resonance in an academic career marked by a series of honours including an OBE.

“The Foot and Mouth outbreak was grim. For a time farmers lost hope, but time heals and the Heritage GeneBank and the Sheep Trust continue as a reminder of how science can help farming and protect some of our most distinctive native animal breeds.”

University archaeologists go back in time to shape York Minster