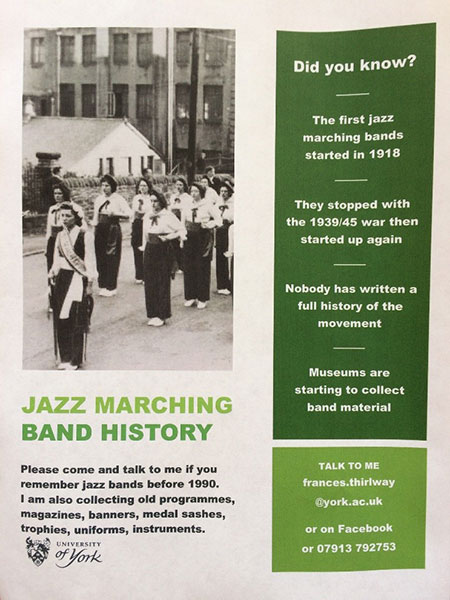 This research project focuses on contemporary juvenile jazz marching bands in the North East of England and South Wales and similar forms of working class cultural production elsewhere in Europe, particularly majorettes in France and Belgium. The bands and majorettes are intriguing as hidden forms of cultural production by working-class white women and girls; their invisibility derives from their exclusion from hegemonic definitions of culture.

Over the past few years I have regularly attended band events and interviewed current and former band members in England and Wales, together with majorette troupe leaders and members in the North of France. This is a long-term project; data collection and analysis have been ongoing as time and other resources permit.

In 2018, five museums and eleven universities took part in a symposium exploring historical and contemporary popular street parade. This  included:

Funding was generously provided by the Creativity and Culture and Communication Theme Research Champions priming funds at the University of York. The event was organised by Dr Frances Thirlway, Dr Lucy Wright and Dr Laurie Hanquinet in partnership with Woodhorn Colliery Museum, the National Museums of Wales and the Huis van Alijn Museum of Everyday Life (Belgium).

Find out more about the workshop

Read a short blog about this research